Seth MacFarlane has done it again; and this one might be his best work yet. Even though I loved A Million Ways To Die In The West, I’ll admit its brand of humor wasn’t as accessible as Ted due to its period piece nature. Well now with Ted 2 out, MacFarlane brings his A-list comedy – and star – material to the table while also making a surprisingly powerful sentiment about equality.

So whether you’re hear for the deeper metaphors of the film or the TONS of Pop Culture references/ Easter Eggs you might have missed, you’ve come to the right place! So let’s get started!

Considering this is Ted 2, you have to ask yourself: does it tie-in to Ted? With so many returning characters (Guy, Donny, etc) and continuing jokes (wishing someone you don’t like gets a crazy illness), it would make sense; but where’s Lori? Considering Ted left off with John vowing to change his ways and be with Lori, it seems strange that Ted 2 would see no Lori whatsoever. Sure this is because Mila Kunis was pregnant during filming, but that could have been written into the story couldn’t it?

Well as we learn in the film, about 6 months after John and Lori got married John realized he wasn’t himself anymore and wasn’t happy so they got divorced. At first, it does seem like quite the co-out and destroys any character development John had during the first film; but then we meet Samantha. The more we get to see Samantha, the more we’re reminded of Lori and how her and John were complete opposites. I’m not going to say who’s better; but by the end of the film it’s incredibly clear that Samantha is a much better match for John. In fact, Samantha is basically the more well-adjusted version of John. She’s intelligent, funny, has the voice of angel but can still hang out, get high and be one of the guys. This gives Sam and John a common ground in which Sam could bring out the best in John without changing who he is at the core.

Beyond romances though, there were also a ton of stylistic nods to the original Ted. For example, when we see Ted and that duck get into an altercation, it immediately reminds us of Ted and Ming’s duck fighting during the Flash party in Ted. Donny of course returns for this film as well, which makes perfect sense since even though he was arrested at the end of Ted, he was immediately released after they realized how dumb the charges of “stealing someone’s teddy bear” sounded. Additionally, throwing in his affinity for the Tiffany song “I Think We’re Along Now” was another great nod.

All in all, Ted 2 is the focal opposite of Ted in that unlike the original, here Ted really is the main character. Sure Ted introduced us to the loveable bear, but at the end of the day it was still a story about Johnny and how Ted helped/aggravated his problems. Ted 2 on the other hand is Ted’s story. Yes Johnny is along for the ride and has a few stories of his own, but it’s all secondary to Ted’s plight of being considered property or a person. With these two switching roles, it makes sense that John would be the one to have a near death experience and then trick his buddy in the end.

Seth MacFarlane is a brilliant writer – understatement. The reason we love Family Guy and similar projects from him so much is because they all reveal deeper truths to us amidst the humor and Ted 2 is no exception. So what’s the “moral” behind this film? No, it’s not that two people arguing should gang up on a third – although that did happen a lot in this film –, but rather “what defines a person”.

Unless something miraculous happens, I don’t think we’ll be fighting for teddy bears to have equal rights anytime soon; but this whole court case was of course about a much larger issue. We the viewers watch Ted 2 and know full well that Ted is a person. So when people in the film label him as property we understand how upset Johnny and the others get. He might not look like us but he talks like us, understands complex emotions, is capable of love and – as we learned in the first one – is capable of being hurt. So if it’s so easy for us to see Ted as a person, why not other people?

The court case directly relates Ted’s fight for equal rights to African Americans and the LGBT community, but it doesn’t end there. It’s the 21st century and yet there is still racism, sexism, classism, religious persecutions and disdain for other political parties all over the world. If we can look upon a teddy bear as a person and want it to be treated fairly, then why not our fellow men and women as well? Food for thought I suppose. 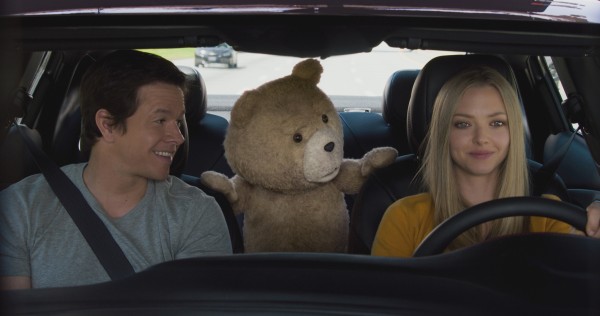 Despite this being a film about a foul-mouthed teddy bear voiced by Seth MacFarlane, I found the funniest – and most unrealistic – thing to be how Ted, Donny, John and Samantha were all able to just walk into New York Comic Con and buy tickets last second. No lines, no hassle, just success. Well played Seth!

So what was your favorite moment of the film? Were there any Easter Eggs/references I might have missed? I’m only one Panda so I’m sure there must be something. Sound off in the comments below to let me know!