It’s hard to believe that almost a year ago, someone leaked the Deadpool Test Footage, which led to the film being made. Though it’s also because of this that countless fans –myself included – sat at their computer’s refreshing Youtube, Twitter, Facebook, Instagram, EVERYTHING to get a chance to see the ‘leaked Deadpool trailer. Sure a 15 second one released almost immediately afterwards – and it was glorious – but considering Hall H played the trailer twice, WE. WANT. MORE! We want the full trailer – and we got it!

When someone finally did leak the whole thing, it was the kind of thing that you didn’t just watch, but actually downloaded it so you could watch it again and again without fear of it being taken down. And that;s exactly what I did and that’s exactly why I have the screenshots I do. So let’s jump right to everything awesome about the trailer: the action, the comedy, the Stan Lee – oh yah, THE Stan Lee.

As the trailer begins we find Wade Wilson and his girlfriend discussing his situation. Like in the comics, he has cancer … extensive cancer. In the trailer Wade sarcastically replies to his girlfriends hopeful sentiments with: “You’re right, the cancer is only in my liver, lungs, prostate and brain … all things I can live without.” This brings him to meeting with a sketchy man who promises he can not only heal him, but make him stronger. Of course this is all the Weapon X program and Wade agrees.

“Just promise me you’ll do right by me, so I can do right by someone else … and please don’t the super suit green OR animated”

The Test Footage Returns … But Better:

After Wade throws some more jokes around – like calling his doctor Posh Spice and the assistant the ‘Less Angry Rosie O’Donnel’ – and we see some of the horrible conditions of this program, the trailer turns into the old leaked footage from last year. It’s a little cut down and the music is changed from Gwen Stefani to DMX, but it’s all there – this time with all real people.

“This guy’s got the right idea, he wore the brown pants!”

“Dady needs to express some rage”

Allies, Action & A Lot Of Laughs:

After the ‘test footage-like’ segment, we (and Deadpool) meet Colossus and Negasonic Teenage Warhead, to which Deadpool says “that’s gotta be the coolest name ever”. The rest of the footage is mainly action shots of Deadpool using his trusted swords as well as him killing 3 men with one bullet and then shooting another one while in a Burt Reynolds pose. Though all of this is made all the more incredible as we see a now unmasked Deadpool / scarred Wilson talking to Weasel about how ugly his face looks now. Notable insults include: 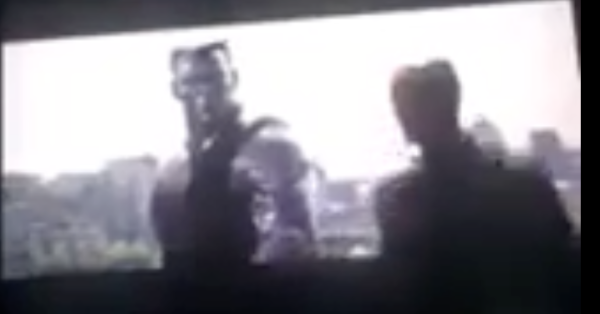 It’s might not be a Marvel Studios movie, but it’s still a Marvel film and Stan Lee is in it. Although unlike some other films that make you wait for it, Stan Lee made an appearance in the trailer itself as a Strip Club DJ … Seriously though! Is it February yet? Deadpool hits theaters February 12th, 2016 so stay tuned here for more analyses and updates as they arrive.

*Note: This article will continue to be updated as soon as better quality footage – and thus screenshots – become available!