This past Season on Agents Of SHIELD and Agent Carter, we saw a lot of ‘almost’ Civil Wars: Coulson’s S.H.I.E.L.D. vs Gonzales’ S.H.I.E.L.D., Agent Carter vs the SSR. Thankfully those two resolved peacefully and it seemed like we’d have to wait for Captain America: Civil War to see the next battle. Well, we were wrong because a new war brewed this past weekend at San Diego Comic Con when all these Agents met up at the  lip syncing flew! DubSmash War!

What was this strange new battlefield? Hayley Atwell (Agent Carter) and James Darcy (Edwin Jarvis) were up for the challenge, but first wanted to practice a little…

… and then, officially accepted the challenge 2 hours later that night! It was on!

Though despite already issuing their response, Hayley and James wanted to make sure they stayed in tip top shape.

But nothing could have prepared them for how far Clark and Chloe were about to take it.

The dubsmash war continues me and @clarkgregg against @realhayleyatwell and #jamesD

Look at that swagger! Those camera angles! These S.H.I.E.L.D. Agents didn’t come to play; they came to win! But Hayley and James wouldn’t go down without a fight! IF Clark and Chloe were going to raise the stakes, Haylet and James were going to make it personal – by dubsmashing one of Chloe Bennet’s hits during her time as a Chinese Pop Star … Uh oh!

Though the video wasn’t enough, they had to get footage of Chloe Bennet watching it for the first time. Insult meet injury! PS: How cute are Hayley Atwell and James Darcy!!!!!

Though that would be a move Haley and James would come to regret as the Agents of SHIELD would come to the aid of their beloved Skye/Daisy. For what they had planned for a rebuttal would take not 2, not 3, but 10 Agents! It was time to drop the mic and prove that they are the champions!

Though victory wasn’t enough! For they too had to get the sweet satisfaction of seeing the look of defeat in their opponents eyes. And in a move fitting of his devious character Grant Ward, Brett Dalton filmed James defeat. Oh the horror!

Hayley didn’t take the video lightly either! It hurt, it honestly hurt her.

Although she wouldn’t admit defeat just yet! Peggy Carter helped found S.H.I.E.L.D. after all, so she would have her revenge. And Clark Gregg wouldn’t expect anything less from her. 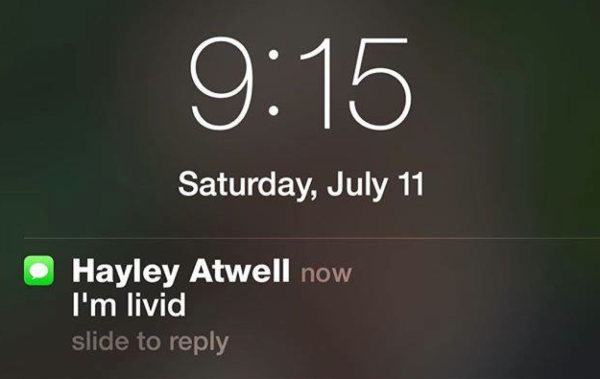 So what’s next in this evolving war? Will new battles be waged or will this continue at SDCC 2016? Whatever the case, it looks like they’ll be some ‘Bad Blood’ in their future!

Days passed and it seemed as though the war had ended. Though while Clark, Chloe and the gang were celebrating their victory, Hayley and James were devising a ‘star-spangled’ counter-attack. If Greg wanted to play hardball by dressing up as Hayley’s character (Peggy Carter) with 9 other Agents, then Hayley and James will strike back with no additional agents, but a Super Soldier

Mic dropped, @clarkgregg @ChloeBennet4 ? Consider it picked up and thrown out of the f***ing window… pic.twitter.com/HJFGi3yOUC

That’s right folk! Chris Evans himself stepped up from the set of Civil War to help Cap’s #1 Gal. This victory is made all the more painful as Clark Gregg’s character (Phil Coulson’s) is Captain America’s #1 Fan. All in all, I’d say Hayley is enjoying victory – and is having the “time of [her] life”. But with Chris/Steve back in the picture, where does this leave James/Jarvis?

And as one Insightful Commenter – Debora – helped to point out, this incredible video gets even better when you realize that this is a scene from ‘Dirty Dancing’ and the character Hayley is standing in for is named Baby, who was played by Jennifer Grey – aka Clark Gregg’s wife. *mind blown* *Internet blown*

And it appears as though Gregg didn’t take it too well either. He brought back his Peggy Carter-garb whilst Chloe Bennet – sporting her new Daisy Johnson haircut – stood by to console him; but OH, it’s not over!

In case you didn’t catch the sign, it reads: “You are challenged to a 3 Round #DubSmashWar Deathmatch FOR CHARITY! Let the Fans Decide!! (Details Here)”

The Agents of S.H.I.E.L.D. might have admitted defeat of that battle, but the War is FAR from over! And this time even more stand to win as the next showdown will be for Charity! 3 Rounds of Epicness. What will #TeamCoulson retaliate with? Sam Jackson? Robert Downey Jr? We’ll find out soon; but either way, this war confirms two important things.

Update – DubSmash Challenge For Charity:
Since this post has grown QUITE loaded, expect the full play by play of each round in a new mega post. So for all the details and coverage of the Marvel DubSmash DeathMatch For Charity – TO THE DEATH! – go here!

Additional Footage #1:
It looked like Chloe Bennet and Brett Dalton were celebrating their victory a little too soon. Either way, #Skyeward fans are expected to celebrate just as much

Last comic con dubsmash I promise. This one is for the skyeward shippers. @imbrettdalton

Additional Footage #2:
We have just acquired some behind the scenes footage from new SHIELD recruit and Secret Warrior Luke Mitchell (aka Lincoln). Thanks to his intrepid videography, he was able to not only go behind enemy lines and document Hayley & James initial reply video; but also be present for Clark and Chloe’s choreographed response. Bravo Luke, bravo!

Additional Footage #3:
You might be wondering where our favorite duo FitzSimmons was during all of this. Well like Luke, Elizabeth Henstridge was busy taking some behind the scenes videos as well. In fact, on the bus you can even see their videos cross – Vidception! As for Iain de Caestecker (Leo Fitz), he’s the man behind the phone filming Clark and Chloe’s moving masterpiece!

Additional Footage #4:
After the crushing blow dealt by Hayley & James, it looks like Brett Dalton again jumped ship back to Hydra. BUT, is the nefarious organization now coming to the aid of the modern day S.H.I.E.L.D.? OR does he have a super hidden plan to emerge the sole winner of DubSmash Wars? (Thanks to commenter Anaelle for finding this video)

72 thoughts on “The Marvel DubSmash War Of SDCC 2015 – When Agents Collide, Everyone Wins!”