After what’s seemed like an eternity, Doctor Who has finally returned to BBC – although something was different! The Season 9 premier was a strange amalgam of Who History and never before seen scenarios/choices. Rather than set things up slowly, this premier hit you hard right from the start and kept hitting till the very last second creating an astounding cliffhanger.

If this premier is any inkling of what’s to come, then this season is going to be a spectacular mix of hard-hitting stories and 2-part episodes that will leave no stone or heart pounding moment unturned! So let’s take a look at this ground breaking – and historic – episode of Doctor Who, titled “The Magician’s Assistant”.

Meaning – Why Was The Episode Called “The Magician’s Apprentice”?

Well in case you missed the short prequel “The Doctor’s Meditation”, we learned that the Doctor was referred to as “the magician” by that axe-battling night. Of course that knight turned out to be a Dalek spy, but that’s besides the point. This night was of course trying to learn from the doctor in the mini-prequel, but besides some insults the Doctor never really taught him anything worthy of earning the title ‘apprentice’. So who is the Magician’s – Doctor’s – apprentice? Well there’s actually two answers to that question.

The first – and easiest – response to this answer is of course Davros. It was the Doctor who taught him to look for the ONE in the Thousand, to do whatever it takes to survive. And the Davros learned that lesson too well. Additionally, the Doctor might not have killed Davros, but he didn’t save him either. This also caused a great deal of hatred in Davros and explains his subconscious fixation on the Doctor – even if he just started to remember it now. Though if Davros was the Doctor’s/Magician’s unintended apprentice, then there is still one who is his intended apprentice – Clara!

This might seem like the give-away answer, but actually look at the opening of this episode. UNIT didn’t call the Doctor first, they called Clara. Clara is now the Doctor’s stand in. She’s been learning from the Doctor all these seasons and now she is good enough to work with UNIT and protect the Earth without the Doctor’s help. Additionally, there was a moment between Clara and Missy where Clara’s ‘identity’ was called into question – where Missy called her the Doctor’s puppy. In the end, the Magician’s true Apprentice in this episode isn’t the child he scorned and inadvertently created, but rather the girl he taught along the way. The girl that even when he made fun of, always stood out among the crowd.

What The Doctor Hides – A Familiar But Different Doctor:

Last season dealt with the idea of identity. Who was this new Doctor? Over the course of the season, Clara and the Doctor all learned what kind of man he was. Though this season is starting off on a very different foot as many of the Doctor’s old lines not only return, but we also see sides of the Doctor that he’s never shown before.

Sure we got a bow-tie comment (Smith) and the idea of the Doctor partying before he’s going to his doom is certainly reminiscent of Tennant’s final days, but it was Baker who really was the most alluded to former Doctor in this episode. We didn’t just get a scarf comment but this entire episode was based off one of his lines about ‘what would you do if you had the chance to kill someone before they became a monster’. The Doctor is of course regretting those words and his choices in this episode as we find a Doctor wracked with shame, guilt and just an overwhelming sense of failure.

Even Clara notices these differences as he compliments her multiple times and then hugs her. The hug itself is a powerful image because as we learned last season, the Doctor doesn’t trust hugs because you can’t see the others face. Though this is one time the Doctor is all too happy to hide his face. He wishes he can hide everything because nothing compares to how deeply he failed. The Doctor didn’t just let Davros live, but he also left a little boy to die. No matter how you slice it he failed. The man who always helps turned his back on a child. And at the same time, he didn’t make sure that the creator of the most bloodthirsty beings of time wasn’t neutralized before he became a threat. So what is he to do now? 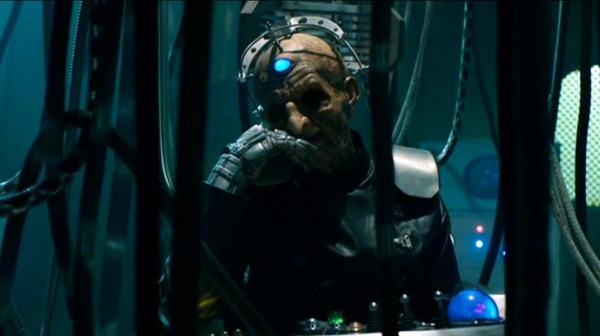 As we saw at episode’s end, the Doctor somehow gets a chance to go back and claims that he’s going to kill Davros. This is what Davros wants. He wants the Doctor to admit that his policy of compassion is a weakness – even if it means killing him. Think Batman and the Joker. The Joker constantly tries to get Batman to break his one rule – to not kill – and that is similar to what’s going on here. True, the Doctor has killed before, but he’s always given people multiple chances before resorting to that. Davros is the example that failed.

Though if the Doctor did kill Davros, then that’ll open up a pretty big paradox. For starters, the Universe will be very different if the Daleks were never created. The Time War might never have happened. Would killing Davros open room for another creator to take his place? Or will the Doctor instead ‘actively’ save the boy and show him compassion – rather than just leave him to die. All we know is something big will be changed because otherwise, Clara, Missy and the Tardis will remain gone!

Just like we hoped, Michelle Gomez is back as Missy – the Master – and she was better than ever! Seriously, if you’re one of the people still upset about the character of Missy, you really need to go back and explore the Master. Missy was fantastic this episode and balanced that gray area the Master has always held. Just don’t call her good, because whereas she does care for the Doctor, she is not doing it out of the kindness of her heart.

Though even someone as twisted as Missy knows how bad the situation is with Skaro returned. In the moments before she was killed, she wasn’t betraying the Doctor with some grand scheme by revealing the purpose of the Tardis. Just because Missy partnered with the Cybermen last season doesn’t mean she’s going to keep partnering with Who villains. Instead, this was Missy simply trying to turn a situation to her advantage. She’s a survivor – so her trying to make a last minute deal wasn’t some bigger plan, but merely the last desperate attempt by a desperate person. 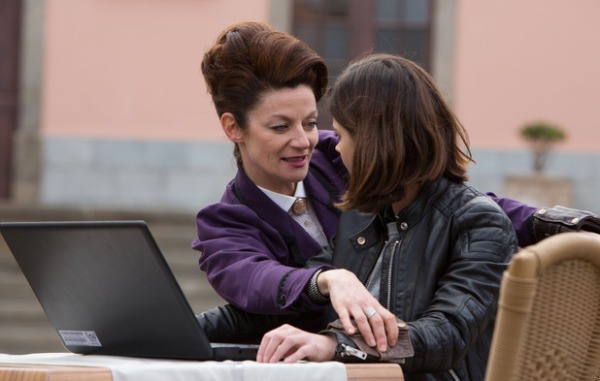 The greatest part of Missy in this episode is her ‘friendship’ with the Doctor. Yes, they fight a lot but that doesn’t stop them from being friends. Remember, the Doctor is always trying to save the Master/Missy. And in return the Master is just trying to bring the Doctor to her way of thinking to show they haven’t grown that far apart after all.

“Since always. Since the cloister wars. Since the night he stole the moon and the President’s wife. Since he was a little girl…One of those was a lie – can you guess which one?”