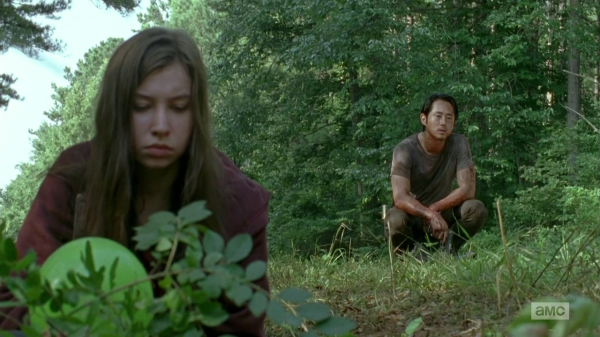 After weeks of toying with the audience and shifting to multiple group perspectives, The Walking Dead finally gave us the fate on THAT character. Though that might not have been the most shocking thing about this episode. Our heroes might think they have all the time in the world; but much like the quarry in the Season Premier, luck has another plan for them. The walls are down and the Season finale starts next week. So let’s take a Closer Look at this week’s episode “Heads Up”

Episode Meaning: “Heads Up” – Be Hopeful, Yet Prepared:

As the penultimate episode of the Fall Season of The Walking Dead’s 6th Season, you knew “Heads Up” was going to set up some pretty big moments; but what does the episode title mean? Well take a look at the episode and you’ll have your answer(s). You see with Glenn being revealed alive in the first few moments of this episode, it’s clear to see that one of the primary points of this episode is to “keep your head up” in the sense of ‘keep hope alive”. This can be seen through Glenn’s conversations with Enid where he tries to get her to not give up on life and live with others. This all culminates in the end as the residents of Alexandria lift their “heads up” and see the Green Balloons, immediately recognized as Glenn’s signal. Sadly though, the other meaning of “heads up” also culminates in this scene.

The other meaning of “Heads Up” this episode is “be aware”. The Alexandrians and Ricks group are finally getting along and acknowledging that they have to be prepared. Though while this is happening on one end, we also see some other residents who are doing the exact opposite. Spencer’s wire plan would have been better planned if he’d given someone a “heads up” and worse still it might have helped cause the building collapse, depending on where he tethered the line to. Additionally, we see Ron who is learning how to shoot; but is of course doing it all as a revenge plan. He’s not trying to survive, but is rather following in his fathers cowardly footsteps and plans to snuff out anyone who speaks down to him – ie: Carl.

Carl really should keep his head up/be aware of this situation, but much like the first meaning of “heads up” – be hopeful – this second meaning also culminates in the final moments. Just as everyone’s heads are already up, to see the Green Balloons, they then notice one of the towers on the outside of the perimeter start to buckle and fall. This was something they never accounted for in their plan and because of that oversight, the walls of Alexandria now have a breech.

It’s important to remember that this Season is actually taking place all in the span of a day and a half. Thanks to a craftily set up episode arrangement and some well-timed flashbacks, we have only progressed a day since the Season Premier. So where exactly does this episode fall? Well episode-wise, this is obviously taking place on that second day but it’s not the “latest” episode. Last week ending sometime after this episode as we heard the words “Help” over the walkie-talkie. Originally we thought this could be Glenn hiding but now it looks as though it’ll be in reference to Alexandria getting overrun.

Though beyond all this there is another aspect of time that has been wonderfully played out this season, and that is thinking you can control it. In the season premier, we found Rick and the gang coming up with a massive plan to get the walkers out of the quarry; but before they could rehearse part of the Cliffside collapsed and they were tossed into the fire. So when Rick brought up the fact that they could “take their time” with this situation and do it right, we knew something was going to fail. And much like the trailer on the cliff-side, their hope of a calmly enacted plan came crashing down along with the old church building outside Alexandria’s walls.

If you’re a fan of the comics, then you probably can already guess what’s going to happen with Carl and Ron. If you don’t want to know then look away now; but if not then here’s my theory. You see in the comics, during the walker attack on Alexandria, Jessie is trying to sneak out with Ron and Carl, but then this goes wouth when Ron cries and wets himself in fear. Jessie then clings to Carl in fear, which makes Rick cut her arm off to free his son. Meanwhile, Douglass Monroe is firing wildly and one hits Carl in the eye – which he surprisingly lives through. All the pieces are in place for something similar to happen here – albeit a little different.

I doubt Deanna would be the one to pull the trigger since she’s never held a gun; and judging by all the set up this episode it’s most likely going to be Ron. Do I still hope Ron cries, wets himself and then gets torn apart by walkers? Of course; but I have a feeling that part of the story will involve 2 different characters. We’ve already seen how Sam is far too afraid to live in this world and if he broke down in fear that would make perfect sense. But what about the Carl and Jessie part? Well that doesn’t necessarily need to happen since this episode Carol dropped off Judith to Jessie. Will Rick end up killing an immobilized Jessie to protect Judith? Will the scene of Rick killing yet ANOTHER of his parents push Ron even further over the line and he’ll take a shot at Carl? We’ll find out next week.

Next week is the Fall Season finale and it looks like it’ll be total madness. The path the Season Premier set us on will come to fruition; and now all that remains is to see where the chips fall. Will any of our heroes die? Will Darryl’s group and the RPGs make it back in time? Will the Wolf Morgan is helping turn good or will he ‘bite the hand that feeds him’ like we’re all expecting he will? Find out next week!

2 thoughts on “A Closer Look: The Walking Dead – “Heads Up””