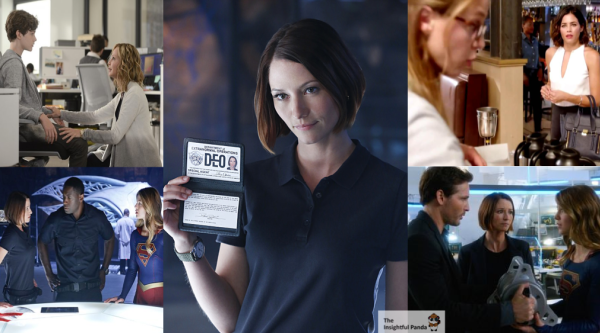 This week Supergirl got a chance to air “How Does She Do It”, an episode that was originally meant for last week; but then got swapped due to the Paris attacks. At first it seemed as though this episode might seem superfluous due to the fact that we already saw what happens next. And while this was true to an extent, “How Does She Do It” knocked it out of the park in terms of what Supergirl does every week – inspires!

So here’s a Closer Look at this week’s Supergirl “How Does She Do It”.

As I pointed out last week… about the following week’s episode… that aired this week – GOD I’ll be so happy when this is behind us – there were plenty of storylines and revelations that would be less shocking because we already saw their aftermath in the episode “Livewire”. We already knew James and Lucy would get back together and that Cat was starting to become more humanized. Similarly, it seemed oddly funny that this episode shows Kara and Alex saying how they think Hank can be trusted when we already saw that idea is harpooned in the following already aired episode “Livewire”.

Though despite all these repeated plotlines, it was still nice to see them play out. For example, Cat’s son and his admiration of Kara is adorable. Further more, Cat’s admittance of “how she does it” really drove home the purpose and lesson of this episode. Cat’s very quickly becoming a strong and admirable character, and that is an extremely welcome addition. She’s sort of become the blunt yet inspiring friend/mentor that we all need in our lives. And that’s what she’s starting to represent for Kara too – and as we already know, that status is furthered in “Livewire”.

Getting more information on Hank was nicely done too as the puzzles pieces are slowly coming together and we can determine whether he is friend, foe or something else. Although considering all the possible villains Kara seems to be accumulating, at least one of these ‘would-be-villains’ HAS to be a secret ally. We already know it’s not Aunt Astra. So is it Henshaw – as Martian Manhunter – or a newly emerged character with questionable motives: Maxwell Lord.

The most unexpected aspect of this week’s episode was the new revelations of Maxwell Lord. We already knew he was a character critical of Supergirl, but now he seems to be putting lives at risk in order to test Supergirl. What is his purpose? Is he trying to discover her weakness to crush her or is he simply judging whether she can be trusted or not?

The final confrontation between the two – in fact the episode as a whole – seemed very reminiscent of an early Superman: The Animated Series episode when Lex was about to premier a mech suit. So could Lord be this series Lex Luther? If it wasn’t for his scenes with Alex, I’d be very much inclined to think that. Though considering these scenes and his Justice League role from the comics, I think Lord is in fact a good guy; BUT doesn’t trust aliens. Would he want to test Supergirl’s powers and find her limits? Sure, but I think he’d use those findings to further humanity rather than for profit. I guess time will tell for this as well.

Up, Up & Away – Easter Eggs, References & Other Notables:

Next week Supergirl gets pretty fired up to fight the Red Tornado, which appears to be a military android meant to protect people; but instead goes rouge. Will this be a failed attempt on Lord’s part? Will this be a test by Henshaw? I guess we’ll find out next week as both Supergirl and Kara look like they’ll have a bit of rage to unleash. So stay tuned!