This half season of Arrow has certainly been exponentially more cheerful than last season; and yet we still leave off on a similar note: the death of a main character in the final few seconds of the episode. So what can we believe? What should we be concerned about? And WHAT in the world was the point of that very narrow focus flashback?

All this and more in this week’s Closer Look at Arrow’s MidSeason Finale “Dark Waters”.

The Merry-Go-Round Of Deadly Situations – Who’s Going To  Die?

Drone-copters, gas chambers, prisoner escapes and hit squads. There was sure a lot of near-death experiences this episode. And we didn’t know who was going to get it until the very end… but were we actually surprised? Even if it didn’t happen in the way we thought it would, the ‘preview’ for this week’s episode still gave away the reveal that Felicity dies – OR DOES SHE?!?!?!

I’ll weight those opposing viewpoints in the next section; but either way you have to admit that this episode as a whole set up multiple people as having their possible end. Malcolm visited Thea and again expressed concerns about his daughter’s safety, which is a continuation of the prior week’s Crossover event where Malcolm threatened Oliver if his stubbornness resulted in harm coming to Thea.

Similarly, it was another father/daughter duo who were as risk this episode – Laurel and Quentin. Numerous time Quentin expressed worrying about his daughter while she spoke about how everyone chose their paths. Could Laurel be the one to get it? Then again, with Laurel discovering her father’s connections to Darhk and Quentin promising that there isn’t anything he wouldn’t do for his daughter, could Lance have been the one to get killed.

Towards episode end, it looked as though Darhk might have been the one to die after Malcolm’s well-played assault; but even that is revealed to be a fake out as the closing scenes play. Darhk is of course alive and well with his family – wait, what? – while Oliver proposes to Felicity; and in that moment we know the illusion of happiness is about to be shattered. But is Felicity really dead?

Is Felicity Really Dead – Arguments For Each Side:

Is Felicity dead? Is she going to survive? Is this all way too simple? Well the answer to all of these is quite complicated, as both “alive” and “dead” will mean something for the series and the eventual Grave Scene we saw in the season premier. So rather than go on and on, here’s the breakdown for each in bullet point form. 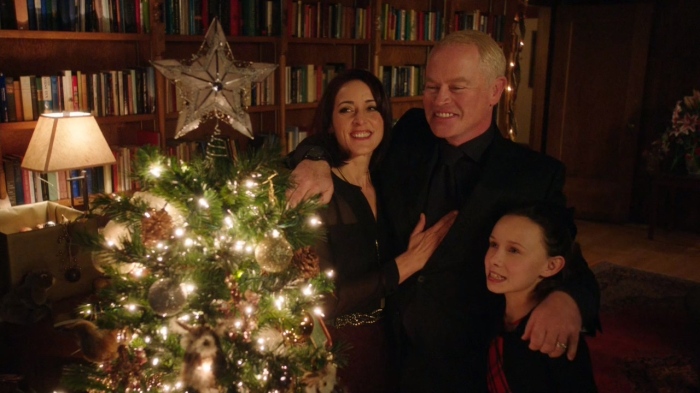 So what is Darhk’s plan? Sure his gas kills – … phrasing – but he seems to want it to do more. Does he want to evolve people? Give them powers? Also how does his family play into this? Will we find a humanizing reason to his evil plans – much like we did with Malcolm and Deadshot’s villainous ways.

We’ll find out this week, so stay tuned for this Wednesday’s return of Arrow – and also stay tuned for our coverage of Heroes & Villains Fan Fest this weekend, which is basically THE Convention for everything Arrow, Flash, Legends of Tomorrow and more! Man, it’s such an epic week!