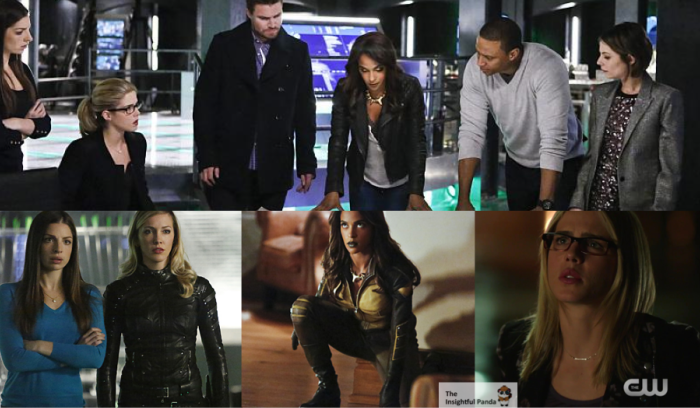 Another week, another Arrow-ing Adventure! And much like recent weeks I’m severely disappointed in… some other reviews! Whereas some might say that “vixen didn’t do anything” or “where’s the dramas”, this episode was overwhelming in terms of Vixen badassery as well as the drama. The underlying tensions were palpable and the outcome of Vixen’s presence caused Arrow to do something VERY few shows have ever done before – beat the main villain before the season’s end!

So let’s put all those nay-sayers behind us and take a Closer Look at why “Taken” was one of the most dramatic and badass episodes of Arrow yet – and in a season of amazing episodes, that’s saying something.

Whether intentional or not, the episode title “Taken” clearly makes the audience think of the Liam Neeson action films in which a father tries to get back his daughter. So some might have been expecting Oliver to go full Neeson and start cracking skulls and snapping body parts in order to get the boy back and were potentially disappointed by the lack of that, but think for a moment. If you know anything about this Season of Arrow OR the situation at hand, you quickly see that the Neeson approach would be AWFUL for this episode.

For starters, the drama this episode isn’t just Oliver trying to get back his son but also trying to hold his life together as Felicity – the woman he loves – learns about his deepest secret. Oliver just met William, and as he recounts in the ‘18th bday video’ at the end, he is merely a father in biologics and has done nothing yet to earn the term of ‘actual father’. If anyone on the show was going to go rogue and break heads – Neeson-style – if something happened to his kid, it’d be Diggle. This episode went o great lengths to set up Diggle as the role model of what a “father” would do. We’ve similarly seen the same with Lance.

Additionally, in “Taken” the daughter was taken and that’s it. Here, the son is being held captive by someone who is absolutely more powerful than Oliver. He needs subtly to be part of his approach since Darhk has leverage. If Arrow went on a hunting spree, Darhk would have forced Oliver’s hand even sooner – or worse. Think of any Law & Order, Blue Bloods or crime scene show where someone is kidnapped and they say “no cops”. What do the cops do? They sneak, they don’t start busting heads and show everyone they’re there and coming for the criminals. Busting heads and outbursts of anger isn’t drama. It can be part of it, but real drama is showing turmoil of character and this episode was filled with it for Oliver. He’s balancing (1) trying to get back his son, (2) saving his relationship with Felicity, (3) still trying to save his city and finally (4) the added drama that the woman who almost cost him his relationship with Laurel is not only meeting Laurel but also Felicity. Oliver couldn’t go on a vengeance rampage like he did after Felicity was injured. Between Darhk HOLDING his son as leverage and Oliver’s head being torn in so many different ways, it’s completely impossible for Rampage Oliver to come out.

The Overwhelming Purpose Of Vixen/Mari – Powers, Mysticism & The Good Of A Child:

As I started mentioning before, this episode did something that VERY FEW shows ever do – in fact, I only recall the anime Sword Art Online doing it – and that is defeating a season villain before the season is over. Will there be more to the Darhk story? As of the moment, who knows? But right now it seems like Team Arrow has dealt a fatal blow to him – and that would have been impossible without Vixen. Thanks to Vixen’s knowledge and abilities, she was not only able to hold off and steal from Darhk, but also destroys the Krushu Idol which is his connection to the supernatural. Although Mari doesn’t need a magic totem – or destroying another – to be a total badass and important to this episode.

Picking up from what I was saying in the last section about Diggle’s role as the “father” voice, Mari offers the other side of that coin – the “child”. As we learned in her series – and again in this episode – Mari most of her childhood wondering who her real parents were and why they didn’t want her, but once she learned the truth she knew it was for the best. If she had known then what she knew now, she would have had a childhood. There would only be the pressure and the secrecy and no time to grow into her own person. If Diggle represents the point of view of “what a father needs to do”, then Mari represents the point of view of “what a child needs”. Both are incredibly powerful points of very and both are correct, but it is ultimately Mari’s point of view that wins in the end because – as I already mentioned – Oliver acknowledges that he’s not William’s father in any way besides biologically. Does he wish to be? Yes, but at the moment he feels he has not done anything to deserve that, nor will he have the opportunity to for quite a while.

First Oliver forced his hand…. By cutting off his hand. Now Thea has not only rejected Malcolm – yet again – but this time did so by invoking the name of Robert Queen. Sure this continues the whole story theme of ‘biological fathers’ vs ‘true fathers’ (ie: Oliver vs Diggle), but this also is putting Malcolm more and more into a corner where he holds nothing. And by the look of next episode’s preview, he’s going to pick up where Darhk left off and once again try to bring Star City down. Is it too late for Malcolm? Is he really doing this as some twisted gift for Thea or is he himself deceived by his own lies? Considering all this focus and Darhk now being powerless, it’s seeming more and more plausible that Malcolm is indeed the “Him” Oliver intends to kill in a few months.

Continuity With The Flash “King Shark”:

This week’s episode of The Flash brought Diggle and Lyla into the fold so of course we had to hypothesize where it fit into place. Due to The Flash spending two back to back episodes in a 48 hour period, its hard to tell where they were and how much time passed before this week’s episode. So initially, it seemed as though The Flash this week happened right after “AWOL”. Though in this episode of Arrow we see that Oliver called everyone in. Was that the call Diggle got last episode, thus making “King Sharkl” completely catch The Flash up and end with Diggle getting the call tonight?

Possibly, but there’s one other tidbit of information that doesn’t make sense as of the moment. Samantha said that a CSI – Barry – told her to call Oliver when he investigated the kidnapping scene. If Oliver called everyone post kidnapping, then why didn’t Barry tell Diggle about the situation and/or wonder about how Oliver was at all. It’s entirely possible the A) Barry just didn’t tell Diggle because of the secret; HOWEVER, what if this episode of Arrow takes place BEFORE the prior night’s Flash. That could explain why Barry asked about Felicity not returning his calls – ie: she wants space and upset that Barry knew and she didn’t – as well as explains why Barry doesn’t say anything since it’s already passed.

There’s a case for each option since we don’t exactly know how much time Flash skipped forward, but due to the amount of Flash episodes to place, the “pre-King Shark” Theory seems to make the most sense – but we might not know for sure until the mini hiatus is over. Then again, perhaps I won’t get my answer unless Greg Berlanti, Marc Guggenheim, Andrew Kreisberg or someone on the show reads this article and responds… I’ll wait for you all ❤