With only 3 more episodes left this season, this week’s episode of The Walking Dead had the unique opportunity to both end last week’s attack on the Saviors; but also set the stage for the finale three episodes. What this week cut down on in terms of physical battles, it made up for in psychological battles. Sure there was still some epic fight scenes between two group almost entirely made up of women; but where this episode really gets its strength is by comparing and contrasting these two groups to see just how far – or too far – our heroes have come.

So let’s take a Closer Look at The Walking Dead “The Same Boat”.

As has happened the past few episodes, this week’s episode title “The Same Boat” is actually part of a direct quote from one of the characters. Here it’s heard from one of the savior women commenting on how both she and Carol are in the same boat – ie: they’re both dead women. This idea of one or the other dying was held through most of the episode as Maggie and Carol were at the mercy of the Saviors and the saviors were at the mercy of Rick’s group. Now of course our heroines completed the mission on their own; but the whole idea of “the same boat” was that there was the risk of death for everyone; but rather than there was an incredibly complex parallel being set up between Maggie and Chelle, and Carol and Paula.

This entire episode was a battle of wills to not only see who was right but also who what might be. Maggie’s primary interactions were with the Savior named Chelle who not only lost her father and boyfriend, but also was pregnant at a time. Maggie’s already lost a father and she is pregnant. Will she loose a husband soon too? On Carol’s end, she was pitted against Paula, someone who also used to be weak but then took control, made herself stronger and has now hit double digits in terms of ‘kills’. Carol has of course come a long way and overcame her timid beginnings, but will she go as far as Paula now that she too is in the double digits (20) and be completely shut off from humanity? Carol fears so.

This is the reason there’s so much hatred from the Saviors to our heroines – specifically Paula towards Carol. They see in them where they were and are reminded of what they lost. Chelle sees that Maggie is with child and has to face her losses. Paula sees Carol’s timidity and hates that she still got to hold onto that side of her. It’s all an act of course and Carol has to come to terms with their revealed similarities by episodes end. And when the episode ends, you can see both women are exhausted as Maggie renounces this way of life and Carol is clutching the rosaries so tightly she’s bleeding. They’ll both find the pros and cons of their ways of life over the next few episodes – and others will help them explore that and come to terms with their decisions – but they might not get to choose their way of life as a rug is about to be pulled out from under them in the most brutal way imaginable. 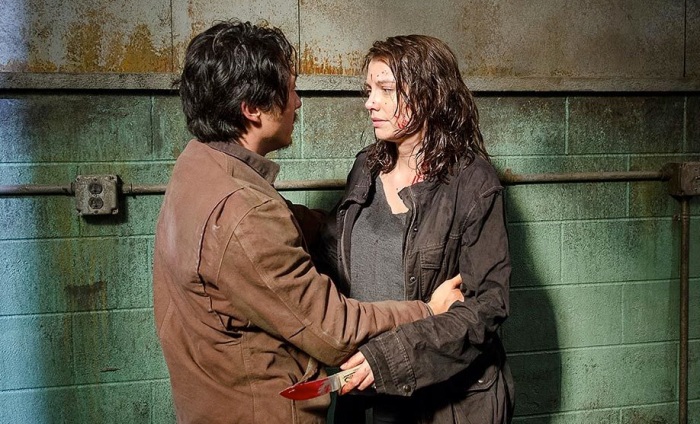 The Eradication They’ll Soon Regret – Setting Up The Finale:

If you’ve been following closely or just now the comics, you already have a VERY bad feeling about this situation. The Saviors with Maggie and Carol said “we’re all Neegan’ and the one remaining Savior Rick had claimed to be Neegan as well before Rick blew his brains out. Sadly, none of them are. This is a clear and obvious rouse to disguise their real leadership and numbers. Did you note how the Saviors had a safe house and multiple protocols in place. That level of organization is beyond what even Rick’s group does and now that Rick and the others think they’ve killed “ALL” the Saviors, things are going to get really bad.

Rick and the gang will be placed in a false sense of security and when they least expect it, Neegan and the other Saviors are going to strike. How would they know who to strike though since everyone Rick and them met is dead? Well there’s still those several people Darryl saved, who betrayed him and went back to Neegan. That’s why Darryl was so concerned about the bike. That was HIS old bike that was stolen. Though considering coward we’ve seen the leader of the Hilltop to be already, I wouldn’t be surprised if he rats out Rick and the rest of Alexandria to score new favor with Neegan.

I guess we’ll find out with the remaining 3 episodes of The Walking Dead. As far as timing goes, I suppose next week will show some return to normalcy and then end with something ominous, perhaps someone getting killed mysteriously. Then the second to last episode will set up the finale and leave off with many heroes being taken, until finally the finale crushes all their – and our – hopes and optimism. With so much talk about how overwhelmingly dark and hopeless the finale is, I can’t decide if the comic fates will remain the same or if they’ve come up with something even more heartbreaking. Stay tuned…. and keep the tissues close.