There’s only one episode left for The Walking Dead this season and it looks as though our worse fears are indeed coming true as this episode left many of our favorite characters at the mercy of Negan and the Saviors – and more about to fall victim. Though beyond all the hints of death, there was also potent reminders about sparing people and the burden of being a force of nature. The world and the Saviors as a whole are a lot bigger, and our heroes just learned how ill-prepared they actually are.

Here’s our Closer Look at this penultimate episode and whose did and didn’t get a death foreshadowing.

The episode title might be “East” but things certainly went “South” this episode. Despite just losing Denise and knowing that an attack from the Saviors is imminent, there were quite a few moments of peaceful bliss this episode for our heroes. Those are of course very short lived as certain members decide to use this time to split up and thus draw even more fighters away from Alexandria when it’s most at risk. Carol headed East and some Saviors on the road. Does this mean the Saviors stronghold is also East? Regardless, she learns – as do we – that the Saviors already know about Alexandria and have scoped out the place quite a bit. Add in Darryl, Rosita, Glenn and Michonne already being captured and Rick’s warning about them coming for them is already coming true.

Where There’s Life There’s Possibility – Morgan Stance & The Man Who Got Away:

We’ve seen Morgan take this stance ever since he was reintroduced to the crew this season; but is this a good view or not? We’ve seen times when it failed, (ie: letting the wolves go who later attack Rick), but we’ve also seen times when it worked (ie: saved the wolf who saved Denise who saved Carl). Though it’s important to remember that Denise wouldn’t have been in danger at all if he’d just killed the wolf. Regardless, there’s seems to be a definite showing of how people can potentially be reasoned with, but only one at a time. Is there really time for that? Does this mean anyone spared could eventually be redeemed – even Dwight? Was the man Morgan let get away good or bad?

Well we’ll have to wait and see for most of these; but that last one directly relates to Morgan’s views this week, so let’s explore that for a moment. Some viewers might have suspected that was the man who was tracking Morgan and Rick, but there’s no way he could have gotten in front of them especially since they were in an open field. Additionally, if you looked closely he was wearing some body armor. His weapon might have been Hill Top made; but that doesn’t necessarily mean he’s Hill Top or Savior. Who’s to say Hill Top doesn’t have another trade agreement in place? Based on the armor, it’s entirely possible that this fighter is neither Hill Top nor Savior but actually a member of The Kingdom.

The Kingdom as comic readers know is another community much like the Hill Top with an equally interesting leader – albeit more likeable – named Ezekiel. He runs a community based out of a fortified high school called The Kingdom, where his fighters have been nicely armored in the comics. He and his group is a pivotal part in the Saviors War and considering where things are going would be a welcome ally come next season.

Okay, now for what everyone is wondering: WHO IS GOING TO DIE!!! We’ve heard the general foreshadowing building – ie: talk of Negan killing one member of a group as an ‘introduction’, photos of people’s heads bashed in, etc. Someone we love is going to die and it’s going to probably be the hardest thing to watch in Walking Dead history. But who will it be? Here’s the options thus far. 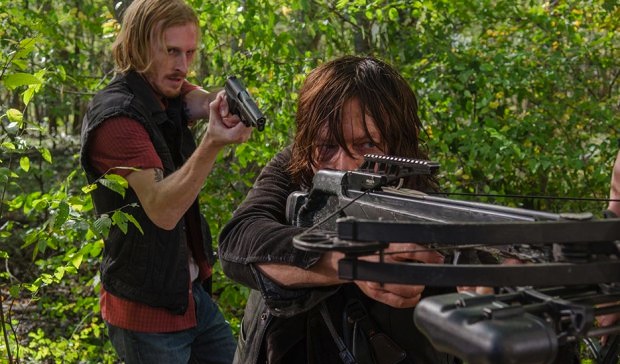 Who’s a goner? Who will survive? Who will wish they were dead. Rick was right when he said they started something rather than finish it. Next week’s finale might bring the Season to an end, but you can be sure the war will take center stage next season. So stay tuned for next week and bring your tissues… and a pillow to scream into.