After a season of hoping and waiting, we finally got to see a Crossover between The Flash and Supergirl. Considering both Grant Gustin (The Flash) and Melissa Benoist (Supergirl) both used to be on Glee together and are the bubbliest of the Berlanti-Kriesberg superhero shows, this crossover made perfect sense. With The Flash’s ability to cross dimensions into Earth-2, we knew it was only a matter of time before he came here to … Earth-3?

Call it what you want, because this crossover continued the legacy set by Flash and Arrow crossovers by being both an excellent Supergirl episode and upping the ante in terms of action, humor and heart. From Day 1, we knew this show would go the way of The Flash – cheesy beginnings to incredible heart and power – so let’s take a Closer Look at one of the “Worlds Finest” Crossovers. 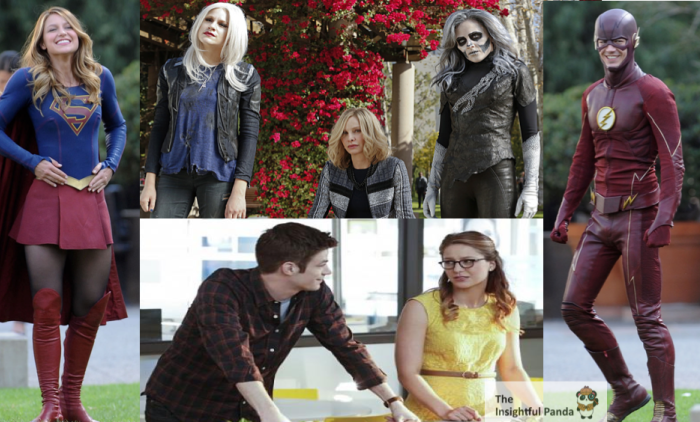 As with all Crossovers, we have to see WHERE this comes continuity-wise for both shows. When dealing with The Flash and Arrow, that’s one thing; but The Flash and Supergirl are on two different worlds and networks. Yes they are both worked on by Greg Berlanti and Andrew Kreisberg, but considering the difficulty of coordinating time tables between two Networks – as well as the fact that the core Arrow-verse DOES NOT have a Superman, etc – this wasn’t exactly easy to pull off. Thankfully though, everything worked out not only thematically perfect but also aired in almost perfect sync as well. How so? Let me explain.

From a story/episode placement standpoint, these two shows were 99% perfectly timed. Lately Supergirl has been questioning herself and wondering how she could stand for a city that has lost faith in her. Flash fans will know full well that Barry’s had some problems with public perception before. In fact, NOT ONLY did last week’s episode of The Flash deal with Trajectory – a female speedster who was framing the Flash – but last year during The Flash’s first crossover with Arrow we saw Barry’s mind altered by a rage-inducing Metahuman. Although the similarities between this episode and The Flash’s first crossover – Flash vs Arrow – don’t end there!

Additionally this episode, Barry teaches Supergirl to canvass and area and have a plan before rushing into a battle with Metahumans. These are both lessons the Arrow taught the Flash on their first crossover, and now the Flash is teaching these to Supergirl. Look at our little Barry, all grown up and leading Spin-Off Crossovers of his own!

If you’re wondering why the title “Worlds Finest”, it actually a play upon the title “World’s Finest”. “World’s Finest” – with the apostrophe – was an old comic line that featured Superman, Batman and Robin though the more familiar one is the old DC Animated film World’s Finest, which featured the inaugural crossover between the Batman and Superman Animated Series. It’s also important to note that in a later episode of Superman the animated series, he did have a Flash episode where – like this episode’s end and much of the promotional material – they raced. Of course these are all World’s Finest. This episode is titled “Worlds Finest” without an apostrophe and that is because unlike all those other instances, this crossover is taking place over multiple WORLDS.

As we hypothesized weeks ago when Myriad was first mentioned, Myriad is INDEED a plan to mind control people. Now that Non has activated it – and there’s only 2 episodes left this season – Supergirl will have to race to stop Non from enslaving the rest of the world and freeing National City – and James.