Arrow has returned for it’s 5th Season and this time around it’s all about “Legacy”! With Oliver now acting mayor of Star City, the team fragmented and our hero entering his 5th year of his crusade – not to mention his last year of flashbacks – it’s time for him to start thinking about his own legacy. Last Season saw Team Arrow lose Laurel, fail to completely stop one nuclear warhead (so long Havenrock), the city descend into chaos and Oliver once again kill. There was a lot for Team Arrow to process, but has time given them any clarity? Have all the loose ends been tied up yet? …. Not really.

From old habits dying hard to some epic Season 1 déjà vu, it seems as though it’s business as usual on Arrow…. The good business. I swear! Though that’s at least what we can tell from this episode. But let’s not get ahead of ourselves, and instead take a Closer Look at this week’s episode of Arrow, aptly titled “Legacy”.

“A Shark That Does Not Swim Drowns” – To Moving Forward Or Not:

When we first pick up with Team Arrow, it seems as thought it’s just… Arrow. Thea and Diggle have kept to their word of needing a break. Oliver on the other hand, despite being sworn in as Mayor and wanting to be the hero this city needs in the light has returned to his darker ways. In fact, not long after his political career begins, Oliver decides to use this position as a means to an end in order to help the Green Arrow be even more effective in the Oliver has regress all the way to his Season 1 self – and he’s not the only one! Throw in Quentin returning to his alcoholic self and this is Season 1 all over again, but I’ll discuss that more in a little bit.

On the other end of the spectrum, we see the route that Thea, Diggle and Felicity have taken. Eventhough we see Diggle still in the service and Felicity moved in with a completely new guy, Thea is the one who primarily tells this tale of moving forward. She promised that she wanted to see if a normal life is possible and unlike her brother last season, it looks like she was successful. And similarly unlike her brother, she has no desire to go back to it or even risk it – as we see her skirt around returning several times until she has no other choice. Though this return not only confirms her belief, but also shows her just how much her brother hasn’t stagnated but actually regressed. With Oliver once again killing it pits the two on opposite ends of the Malcolm Spectrum. On one side, Oliver is once again on board with doing whatever is necessary. On the other Thea is starting to see a side of her brother that reminds her all too much of the father she needed space from. She’s seen what doing “whatever is necessary” has brought out in Malcolm and she doesn’t want to risk that road ever again. 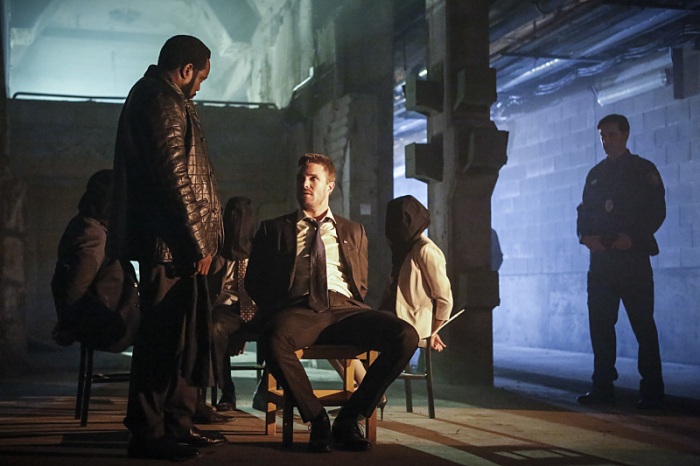 Eventually, Oliver does begin to see that he must move forward and this change is characterized by his acceptance of a NEW team. His stubborn and misguided belief that the old team would get back together was just one of the many blinders he put up. Though with a new threat emerging he sees that he does need help and like many times before, he’ll have to either keep swimming or stop and die. The road is sure to be bumpy and Oliver won’t change over night. The killing might continue as well as some of his other tendencies, but by and large it seems this first half of the season will deal with what Oliver’s legacy actually is. He’s inspired various start-up heroes around the city and it’s his duty to make sure they can carry on his mission. He might have acted a lot like Season 1 Oliver tonight but he isn’t that anymore. He is no longer the lone crusader vigilante. He’s the Green Arrow and like him, the team is going to need to become SOMETHING else.

In recent years, the episode flashbacks have become a little muddy in determining their importance. More or less they became a reason to explain how Oliver knows of a certain artifact or person; whereas early seasons portrayed flashbacks as a time to parallel Oliver’s current situation. Whether it be a lesson or skill, these flashbacks were always spot on and this episode brought us back to that.

This flashback not only showed us how Oliver learned to get out of handcuffs but also gave him the saying “A shark that does not swim drowns”. As I explored in the previous section, this was key to Oliver moving forward and not getting caught in the past too much. Additionally, in the flashback Oliver’s course was set by a promise to a dying woman he loved. So too in the present Oliver remembers the promise he made to Laurel, that there would always be a Canary by his side. Whether that Canary is Evelyn Sharp or someone else remains to be seen. Personally I’m keeping my fingers crossed for Earth-2 Laurel Black Siren, but I’m getting off topic.

This episode returned us to the good old days of Flashbacks and current stories having perfect sync and major importance. And that’s a good thing considering this will mark the last year of flashbacks. “For 5 years” he was stranded on that island – and other places. As Season 5, this will mark his final year and thus there will be no more flashbacks to Lian Yu after this. How will the series function without them if there’s a Season 6? Let’s cross one bridge at a time, but regardless, this season seems to be pulling out all the stops when it comes to hard hitting, relevant flashbacks.