Here we go! Season 3, Episode 1 of The Flash and a lot has changed! Well, at least it has universe-wise for Barry. As far as the series is concerned, the Season 3 premier of The Flash brought us everything we love about the series and kept in perfect pace – and format – with the Season 2 premier. Once again, our adventure begins ‘in media res’ with 3 months having passed since Barry’s trip back in time. Now all that’s left is to catch us up with what Barry’s been up to and WHAT that simple trip has changed… and more importantly the trip back!

On the one hand, it seemed as though Barry had finally gotten everything he wanted. On the other, that all and more was about to be taken from him. Though when Barry finally wises up and faces the music, it seems as though Time wasn’t ready to forgive him all just yet. Time hates when you screw with it and it looks like Time is just getting started with screwing back!

So let’s slow it all down and take a Closer Look at The Flash Season 3 premier “Flashpoint” and try to figure out WHAT got changed on Barry’s return trip.

Flashpoint – And Why It Was Condensed To One Episode:

So as I’ve been saying for a while now – and as many Flash fans already knew – this season introduced the famous storyline of Flashpoint, a story in which Flash goes back in time to save his mother and ends up causing a horrible future. Sure he has his mom again, but the repercussions cause a massive war that almost ends the world. This Flashpoint was a little more condensed and calm, but there are reasons for all of that.

Besides major Flashpoint characters like Wonder Woman, Aquaman and Cyborg not being in the Arrowverse, other repurposed characters and events (ie: Robert Queen as Green Arrow, Leonard Snart as Mayor) are already part of the Earth 2 Universe. Additionally, if the Flashpoint reality continued for more than one episode, Arrow and all the other Arroweverse shows WOULD have been affected. But now that the Flash is back in the right universe- for the most part – the other series can move forward with business as usual.

All in all, there was no way this Flashpoint Universe could last for more than one episode or be as grand as the comic/film counterparts. That being said, the repercussions will be just as large. As I’ll explore towards the end of this article, the current universe Barry is in has some slight changes and whether he fixes them or not, more changes are sure to beget more changes. We won’t know the full extent of these changes until later this season, but it’s safe to assume this may have some hand in how Earth 1 and…. Earth 0? (Supergirl’s Universe) are able to merge.

The Complexities Of The Reverse Flash – Hero, Villain Or Bit Of Both?

By now we should know that the Reverse Flash is an exceedingly complex character who can simultaneously pull at our heartstrings and at other times seem like the sickest person ever. Though to be fair, each half of that performances has usually been portrayed by different actors. Whereas Tom Cavanagh is usually associated with the complex good and evil side of the Eobard/Wells, Matt Letscher has usually been limited to only portraying the rage-fueled Eobard. This time around however, Matt Letscher’s Eobard finally got a chance to show his range and it was just as powerful and emotionally complex as any of Cavanagh’s takes on Eobard.

Despite being a villain, Thawne was indeed “the hero” this episode – and Flash the villain. Sure this is true in a very twisted way, but there is actually more to this if you’re willing to look closely and remember Thawne’s origin story. But before that, it pays to mention an important quote by Eobard. 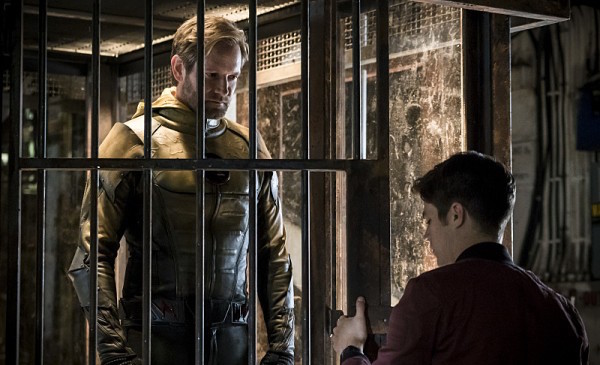 After Barry tell’s Eobard that he hates him, Thawne responds with “And I hate you, but I sometimes wonder which of us is right”. So? Why can’t they both be right about hating each other? Well, let’s look at their histories. Despite all the pain Eobard has caused – and will cause Barry over the years, Barry never kills him. Conversely, Eobard might hate Barry but also remember everything his origin. Eobard was once Barry’s biggest fan but turned evil when he looked into history and learned that it was his destiny to be the Flash’s enemy instead of ally. Does Eobard truly hate Barry or is he just a scorned fan?

It’s hard to tell sometimes and this episode gave Eobard something he always desired: to BE the hero he originally wanted to be. Sure it’s achieved through killing Barry’s mom, but it’s also setting the universe right. Though just because Eobard is the hero today, there’s no telling what he’s got in store next – and what side he’ll appear on. Could Reverse Flash Eobard Thawne become the Malcolm Merlyn of the Flash universe? Could he be the villain we love to hate and hate to love – as well as the villain that secretly loves his opponent and will help him when push comes to shove? Well that’ll all depend on how the next part plays out.

Flash(counter)point – What Did Barry Change This Time?:

So wait… what happened? According to Eobard, things are “the way they should be” for him, but not for Barry? So what do we know about this alternate x2 present. Well from the looks of it, all the big main events have happened; but there are some slight differences that we can already spot – and some are more concerning than others.

The last one is the most potentially problematic – and confusing. Since his old self disappeared – the Eobard that would be stuck in the past and assume Well’s identity – does that mean Eobard Wells never happened? This potentially erases the idea of Time Remnant, but since time’s been screwed with so much may be this is an exception. Then again, there is another option we can figure out when we look at Eobard’s Timeline(s). See below! 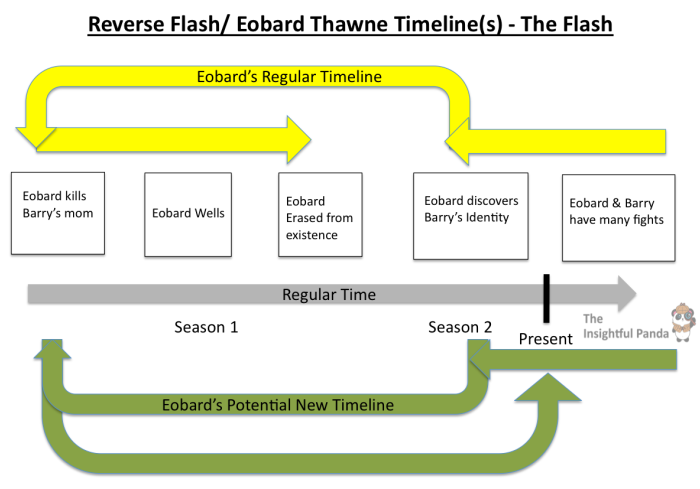 When Eobard said “see you sometimes soon” was he really referring to PRESENT him in this potential new Timeline (Green Graph Line) or a past version of him that is about to do battle with the Flash for the first time in his original timeline (Yellow Graph Line). After all, remember the Reverse Flash’s timeline runs counter to the regular timeline. Right now, there is no way to tell which is which. So for the moment, let’s just chalk this all up to Wibbley Wobbley, Timey Wimey Stuff!

There’s plenty to come this season and with all the Season 3 Trailers focusing on Flashpoint, that means we have NO clue what’s coming next. And there’s actually something exciting about that. With Supergirl and Legends Of Tomorrow expanding the Arrowverse even further this year, it’s probably a good thing and hints at just how closely tied all these series will be this season. This is supported by the preview for next week’s episode, which has Barry already talking with Felicity about current events. Who knows what else has changed and will change elsewhere? Guess all we can do for now is wait and keep taking a Closer Look with each new episode. Stay tuned!