With just about a year to go until the highly anticipated sequel to The Avengers comes out, we’re slowly starting to get more information about the film – although nothing substantial by itself. In many ways, Captain America 2: The Winter Soldier was our last film before Avengers 2: Age of Ultron. Even though Guardians of the Galaxy comes out later this summer, it will actually set up for Avengers 3, rather than the sequel.

Though in the past few weeks we’ve gotten various bits of new info concerning the this Avengers sequel: Captain America wearing an Avengers A instead of the S.H.I.E.L.D. logo, Don Cheadle returning for an important role, etc. Right now a lot of these ideas don’t mean much, but we can begin to piece together some theories of where things are going. So by using what we know, let’s take a look at some possible theories.

Look at that Avengers ‘A’ on left shoulder of Captain America’s few costume!

Disclaimer: Despite these being theories, the supporting evidence is all actual Avengers 2 movie details – as well as spoiler details from Captain America 2. So don’t worry. You will learn important stuff by time the article is over.

The man we met in the post credits scene of Captain America 2: The Winter Soldier is Baron Von Strucker and will be around for quite a few movies – the next of which is Avenger 2: Age of Ultron. In his secret Hydra converted S.H.I.E.L.D. base we learned that he has been performing experiments with Loki’s scepter from the first Avengers film. This could potentially be another Infinity Gem – The Mind Gem – that would play a larger role in Avenger 3, but we’re getting ahead of ourselves.

As we saw in The Avengers, Loki used this scepter to not only blast energy waves, but also bend people to his will. Whether Quicksilver and Scarlet Witch gained their powers through the scepter or are merely being controlled by it remains to be seen. This scene confirms what we heard earlier about the “Twins” starting off in opposition to the Avengers. Thus making them the distraction Strucker wanted them to be, but distraction from what? 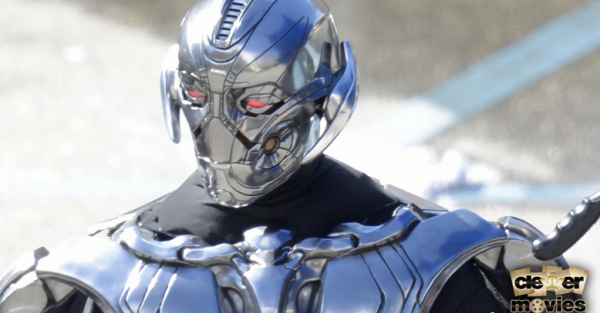 In the comics, Ultron was originally created by Ant-Man, whose movie has yet to be released. Ergo, I think it’s safe to say that Ultron will be getting a new origin story much like “Twins”. From what we know thus far, Ultron will be played by James Spader. It’s important to note that Spader will play him ‘fully’ rather than just have a mechanized voice.

“He’s not a happy guy, which means he’s an interesting guy. He’s got pain. And the way that manifests is not going to be standard robot stuff.” – Whedon

Rather than just another robot, Ultron will be humanized. He’ll be powerful – though not as powerful as in the comics – and will be fueled by a lot of rage, but rage against whom? As far as I see it, there are two options:

Maybe Ultron is the ‘bigger plans’ that Strucker wanted the Twins to be a distraction for. He creates an Ironman-esque suit to house the Mind Gem – instead of a scepter – but the Gem soon takes over the suit and makes it sentient thus becoming Ultron. Being the first/only of his kind – and created by an evil organization – Ultron feels alone and that he has been labeled a monster, which in turn makes him become the very monster they saw him as.

A lot of people have been thinking that Tony Stark creates Ultron in the new movie. Some felt the casting of Claudia Kim as one of Tony’s doctor/scientist friends meant that Tony will get sick or will be messed up from having his arc reactor removed, which in some way leads to him creating Ultron as a new means of surviving. Personally, I don’t believe this theory at all.

A much more interesting theory gained traction after it was revealed that Paul Bettany – who plays Tony’s personal AI assistant J.A.R.V.I.S. – will be playing Vision. In the comics, Vision was one of the Avengers, but was at first created by Ultron. The other theory goes that Dum-E the simplistic hand robot Tony always belittled – that also survived the events of Ironman 3 – is Ultron.

The more I think about this theory, the more I like it. Being his first project, Tony has a lot of sentimental connection with him – and thus Dum-E with Tony. If Dum-E were to get a massive upgrade and become sentient, this could explain some of his ‘pain’ and maybe he felt rejected since Tony has spent more time with his Ironman armors. If this was Dum-E it could also explain why he turned J.A.R.V.I.S. into Vision, since they would have been like robot friends – I can’t believe I just said that.

The downside of these theories is that Dum-E was always faithful to Tony and even saved his life in Ironman. In Ironman 3, he might have put a Dummy Hat on Dum-E, but Tony still went back for him. So it still doesn’t completely explain the ‘rage’ portion. Also, Ultron’s initial look doesn’t look that Stark-ish. It’s a much more organic-looking. In fact, why doesn’t this look like the Ultron from the SDCC announcement teaser?

Since the announcement teaser at San Diego Comic con last year, there has been speculation that Tony Stark creates Ultron since the teaser showed an Ironman Helmet changing into Ultron’s iconic helmet. As we saw from the production photos last time, Ultron’s helmet looks very different from what we’re used to – much more human.

Regardless of who creates Ultron initially, here’s my theory – and the theory I’ll put some faith in right now. The human faced Ultron is seemingly destroyed at one point in the movie, but recreates itself in one of Tony’s suits. This is actually one of the story lines in the Mighty Avengers comics, although at the end of this story Ultron become a woman . . . I can almost guarantee that last part won’t happen, but taking over one of Starks suits does make sense. This would explain why the trailer saw one of Tony’s armors changing into the iconic Ultron – rather than being built. You can actually see Ultron breaking out of the armor in this horrifying metamorphosis. 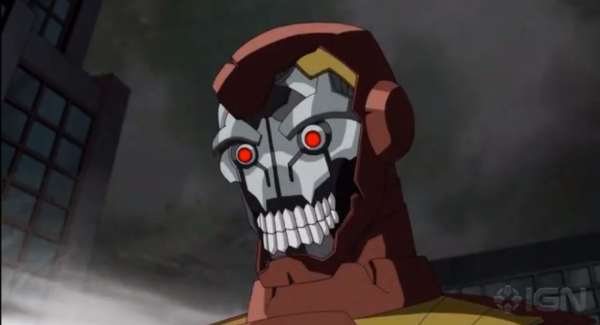 There has also been some talk – and possible confirmation – about Ultron being composed of Vibranium, which is the rare material that Captain America’s shield is made out of. In the comics he was originally made out of Adamantium, but with that being held captive along with mutants with FOX a new material would be needed. Whether Vibranium or Adamantium, this will clearly make Ultron even more powerful; but this actually means something even bigger for Phase 3. Since Vibranium comes from an African country named Wakanda – a place that has been hinted at several times in the Marvel Cinematic Universe -, Black Panther could be the next hero to join the Avengers – but that’s a story for another time.

Speaking of Ironman, we got some leaks of the new Ironman suit for Avengers 2; however, it seems rather old. The suit is basically the Mark 42 that we saw in Ironman 3, with a different paint job. Considering Tony blew that suit up – along with the others – its safe to say that this is a new version of it that has all the bugs worked out. Although I don’t believe this will be his last suit.

We saw images of the Hulkbuster Armor, but we’ve yet to learn the reason for that battle and which is brainwashed – if either. If you remember The Avengers, tony started with his Mark 6 from Ironman 2, but then upgraded to the Mark 7 for the final battle, which was a serious improvement.

I think the same will happen here and Tony will change into a suit we have yet to see. This would also tie in with my theory of Ultron taking over Ironman’s suit. The – let’s call it – Mark 43 is seen in the fight with skull faced Ultron. This could possibly take place early on and then Ultron transfers himself into that suit – which calls for Tony to get a new one.

Will J.A.R.V.I.S. become the new Vision?

No real big theories on this one. During the last episode of Agents of S.H.I.E.L.D., we learned that one of the S.H.I.E.L.D. bases that fell to Hydra was in Africa. Considering one of the filming locations for the film was Johannesburg, South Africa these facts may be connected and this fight scene could take place by one of the fallen S.H.I.E.L.D. based.

The end of Captain America also showed Nick Fury leaving to hunt down Hydra in Europe. Nick Fury is in fact returning for Avengers 2, but as Samuel L Jackson said, it would be for a much smaller role. With S.H.I.E.L.D. destroyed it’s not going to be a big organization that brings the Avengers this time. Nick Fury will return, but not as the mastermind who gets these heroes to work together. Since a rather large action sequence was shot in Italy, it’s unsure if this was the part of Europe we’ll find him in or not. I guess it all depends on where he leaves off after the season finale of Agents of S.H.I.E.L.D. In addition to these locations, there is also filming in South Korea for a very destructive battle as well as some filming in England. 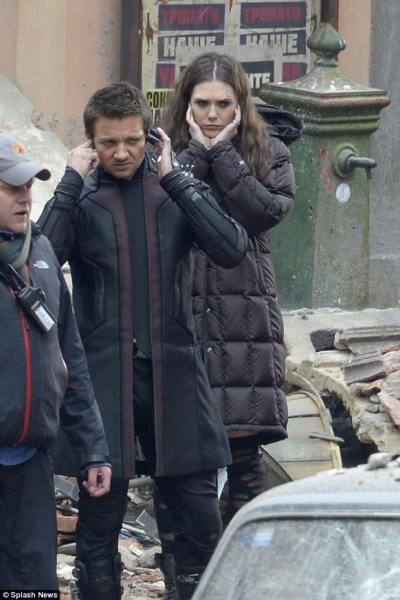 Even Hawkeye gets a slightly updated costume with this coat

All and all, this is already looking like a brilliant movie that can have theory on top of theory. With Whedon blatantly saying one of the themes of this movie would be death – he didn’t hint at anything – you can be sure someone’s going to die. Many think this might be Rhodey’s role in the film, but with him signed for a few more Marvel movies, I doubt he’ll throw in the towel right now. Then again, it’s a movie based on comics. Can anyone really stay dead? I’m looking at you Agent Coulson – welcome back.

Just be sure to remember Loki’s scepter. Whether it creates Ultron, controls the “Twins”, or whatever; it still bridges the two Avengers films. You have to remember that each Avengers movie doesn’t just tie-in to the other movies from that Phase, but actually has a story of its own that is continued from its previous installment. Avengers 2 might deal with the fallout from Captain America: The Winter Soldier and some other Phase 2 films, but at the end of the day it is still AVENGERS 2. It will continue the story of The Avengers, and the part of that story that will be continued is how these heroes work together – to stop a problem caused by Loki’s “glow-stick of destiny”.

Update: For confirmed information from the Entertainment Weekly reveals and how Ultron’s story fits in with the entirety of Phase 2, please read: Avengers 2: Age of Ultron’s Opening Scenes, Vision & More and  The Complete Story of Ultron’s Origin