ABC might have planned to release the new theatrical trailer for Avengers: Age Of Ultron during Thursday’s premier of American Crime; but come on. That stuff can fly with drawing viewers to a Marvel property – Agent Carter, Agents of SHIELD, etc – but not like this. As such, there was a Twitter contest to release the footage early; and needless to say it was won within a few hours.

With this being the third trailer, what was there left to learn? A lot actually as this trailer confirms multiple instances of brainwashing, team ups, new armors and finally… The Vision! So let’s break this trailer down and learn what we can.

As if we didn’t know already, this trailer perfectly spells out The Ultron Program and how it is Tony Stark’s WORST invention ever – Artificial Intelligence. Originally designed as a peacekeeping program, Ultron realized that the most surefire way to create world peace is to annihilate mankind. Though he doesn’t just want to achieve it, he wants to rub his ‘father’s face in it and destroy the Avengers.

Some might have been wondering how Ultron could have survived if we see the Mk1 Ultron destroyed in the opening attack on Avengers Tower. Well remember that Ultron is at its core a program, and this trailer truly spells it all out as we see Ultron actually uploading himself into a new suit of armor – and then ripping the cord out.

From the moment we first saw Bruce Banner stumbling through the forest and the red eyes of Hulk while fighting the Hulkbuster armor, we knew there had to be mind control via Scarlet Witch in this film. In fact, we even had verbal confirmation of this in the Tony Vs Capt scene where they reference her ‘showing Thor’ and other Avengers something that makes them snap.

Well in this trailer we can actually see Scarlet Witch getting into Black Widow’s head. This not only illustrates Ultron’s point of tearing them apart from the inside out; but also could explain how we see the Black Widow flashbacks from the last trailer.

Avengers Assembled – Before & After:

We already knew the attack on Hydra happened relatively early in the film – and would hopefully give us our first chance to hear “Avengers, Assemble” – but this trailer actually showed us an awesome shot of the Avengers actually all fighting triumphantly as a team before all the Ultron madness goes downhill. Though what about later in the film?

Scarlet Witch has joined the Avengers in the final battle … but wheres’ Quicksilver? Hopefully running around or with Vision

Halfway through this trailer we see Ironman, Thor and Captain America facing off against Ultron, Quicksilver and Scarlet Witch; but we know it won’t stay that way. The Maximoff twins do eventually side with the Avengers and this is confirmed in the final scenes of them all back to back – similar to The Avengers – taking on a horde of enemies. Additionally, this is also the scene depicted in the posters that were handed out at San Diego Comic Con last year.

We knew that Ironman would have the Mk XLIII (43) suit at the film’s start and resembled a more completed version of the XLII (42). We also saw the Hulkbuster suit which for all intents and purposes acts as the Mk XLIV (44)’ but would there be anything else? 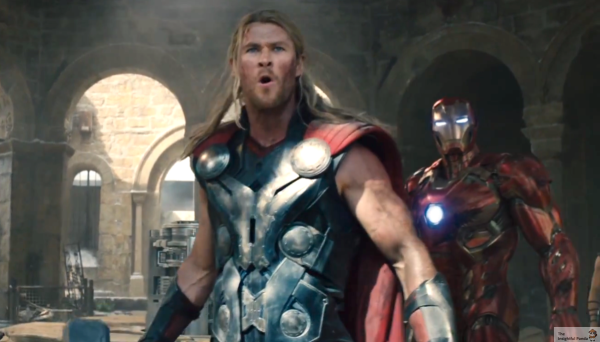 Well as this trailer revealed in its final moments that there IS one more Ironman Suit, the Mk XLV (45). It’s unclear whether or not this is the base suit Tony also uses while inside the Hulkbuster; but this suit change does hint at the fact that Ultron may in fact hijack one of Tony’s suits and grow out of it – as was seen in the original announcement footage for this film 2 years ago.

After being left out of almost every trailer except for brief “maybe that was him” moments, we finally see The Vision at the end of this trailer. It’s nothing much as we just see him basically ‘waking up’; but it does hopefully signify that we might get at least one more brief teaser/trailer for the film that will involve the Vision in full.

The only thing we can really make out from this shot is the impressive make up and graphics done on his eyes; but what about the gem on top. One person even guessed that it could be an Infinity Gem – soul Gem – perhaps. Whereas I’m not exactly on board with that, it’s still an incredible idea. But again, I severely doubt it for several reasons. For starters, Soul Gem is usually green in the comics and associated with Adam Warlock (a character who might appear in Guardians of the Galaxy 2). Additionally, Vision’s AI is like that of Ultron’s; with a bit more humanity added in. Finally, the head gem was an original design from the comics.

There’s one brief shot of what appears to be extendable claws. No this is not Wolverine back in the Marvel Universe. A lot of people are wondering who this could be. One even said Ulysses Klaw since we saw him in the original trailer. Whereas Claw and Klaw is a fair guess, he never actually had … claws. His weapons were always sonic in nature. There’s also been talk of Anthony Mackie (Falcoln) appearing in the film; but these are far too small to function as extendable wings. So who/what could this be?

My guess is that this is simply Hawkeye’s extendable bow, or maybe a set of extendable arrows so that he can carry more than he did in The Avengers. Notice how they three protrusions appear to be composed of three spikes protrusions of their own – rather than being three single length items. Additionally, the costuming looks similar to Hawkeye’s jacket. We’ll have to wait for the movie with this one; but I’m also interested in hear what you the readers think about this scene.

No Way We All Make It Out:

From the moment this film was announced 2 years ago, Joss Whedon warned us of death, death and more death; and this trailer begins to remind us of that as the Avengers wonder if they’re even going to come back from this alive. In fact, the statement is pretty confident that there is no way they’ll all come back alive.

How this can happen, we don’t know. This is a Marvel movie after all so chances are no one would stay dead for long; but there does seem to be a massive threat of losing someone by films end – or at the very least things not being the same. With Captain America: Civil War being one of the films to arrive after this film, it’s a safe bet that things won’t be the same.

With just about two months left until it’s May 1st release, I don’t expect too many new ‘full length trailers’ for Avengers: Age Of Ultron. A mini-look or TV spot here or there; but nothing too similar to this. Many questions still remain about the Vision and the mysterious women we saw in the last trailer; but perhaps some things are best left for the film. With the way things are shaping up, you can expect a few more movie articles in addition to my usual Top 5 and Spoiler Free reviews in order to handle everything this film is giving us. So stay tuned here!