Since Agents of SHIELD has returned from its Midseason premier, the focus this season has been to rebuild some tension and drama now that Hydra has been effectively taken down – or at least sent scrambling. Though the tension can only build so much until something breaks, and this episode started to give us those cracks. Whether it’s setting up the immediately conflict about to ensue within SHIELD or the effective end of the whole ‘Skyeward’ relationship, all fans can agree that this episode more than any other of this second half set up some immediate conflict that will come to fulfillment next episode.

So before we get there, let’s take a closer look at this episode and everything we learned from “Love In The Time Of Hydra”.

The Beginning & Karmic Faults Of The New S.H.I.E.L.D.:

The new S.H.I.E.L.D. sprung up in response to what they see as Coulson’s shaky leadership decisions to pursue alien tech. They point to the deaths of Isabel Hartley and Tripp as examples of what this witch-hunt has left them with. Though despite these valid concerns, their vision and methods are horribly skewed. Yes Coulson’s drive might have been a little excessive at times; but in the end it was all necessary to defeat Hydra who was proceeding with the very same objectives in mind. Additionally, rather than discuss these concerns with Coulson, they’ve decided instead of work behind his back and gather intel – and possibly more supporters – before overthrowing Coulson.

It’s rather fitting that in the end this new SHIELD seems to be slowly succumbing to the same tactics it was built to counteract. When an Agency built to stop secrecy and distrust uses secrecy and distrustful tactics to get started, there can only be distrust amongst the members themselves. Hunter thankfully escaped and saw through this whole circus act for what it is; but the members of ‘REAL SHIELD’ are just as quick to distrust their own when Bobbi ‘lets Hunter escape’. Agent Robert Gonzales (Edward James Olmos) concerns might be sound and trust in his people; but if the new agency is already starting to fight amongst itself, then it’s only a matter of time before the tide turns against them.

It’s been quite a while since we’ve seen Agent Ward and 33. Last time we checked it was the Midseason Finale and Agent 33 was carrying a wounded Ward to safety after he’d be shot in the back several times by Skye. Since that time, we’ve learned that Agent 33 nursed Ward back to help and the two seem to be quite in love with each other. Though as the episode continues we learn that this doesn’t only end the whole ‘Skyeward’ thing once and for all; but also gives us something that make exponentially more sense.

While on a mission to find a way to fix her face, Agent 33 must decide upon which new face to wear since the ‘May’ one is getting a little old. With Hydra and Whitehall literally having stripped away everything that she used to be, she can’t even bring herself to face herself – by literally returning to her original face. During this impasse, Agent 33 changes her face to Skye’s thinking that it would be a just reward for all the Ward has done for her – Ward gets the girl he always wanted, and Agent 33 becomes the woman Ward can love – but Ward refuses her. This isn’t because Ward “loves Skye for more than her looks” or something more deep and emotional; but rather because Ward says he doesn’t love Skye anymore.

The Skyeward Ship basically sailed before Season 1 was over; and Season 2 has only reinforced this. Yes Ward has come a way from being the maladjusted agent who more or less threatened Skye with rape at the end of the first Season; but that doesn’t mean the relationship will happen. He’s still a betrayer and tried to kill Fitz and Simmons. He killed Agent Hand and various other S.H.I.E.L.D. Agents. Those aren’t things that can be easily redeemed; and when Skye shot him in the back at the Midseason Finale, that was a pretty clear signal that this is once again a NOPE.

In the end, having Agent 33 don Skye’s face and have her begin to kiss Ward was in one sense a nod to all the people still clinging to the Skyeward train; but can also be the way to say ‘its over’ and Agent 33 is the new lady he cares for. Now some could argue that ‘this still means nothing, #SkyewardForever’ or something like that; but it would take a TREMENDOUS amount of plot dedication and focus to make it believable. What Agent 33 offers is an excellent pairing as both have been Agents with their prior lives stripped away and left with nothing – until finally having a chance to rebuild. Ward got rebuilt into Garrett’s lap dog but then pulled himself together and found a new sense of self in prison. 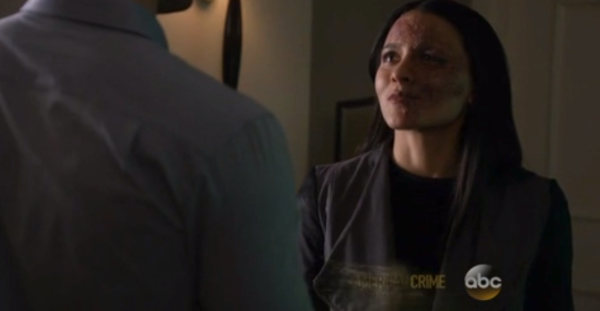 Agent 33 is in that spot too as she had her former self stripped away and built up by Whitehall; but now she is left having to rethink her sense of self. Seeing her at episode end torturing Bakshi is her cathartic release from her past tortures – similar to what Ward did with his family. What plans these two will have from here on out remain a mystery; but you have to put aside any remaining feelings for ‘Skyeward’. I know some people won’t stop believing in Skyeward until the show’s over; but please don’t let those beliefs make you miss an incredible developing story. Agent 33 – now Kara – and Ward’s story parallels are exquisitely framed and add tons of depth to these still chaotic-neutral characters.

Things Change; But Not As Much As You – Fitz vs Simmons Continues:

Fitz and Simmons have been fighting over the outlook on Skye’s powers a lot lately. We are of course all loving Fitz more and more; but it wasn’t until this episode that he finally started to get through to Simmons and make her admit what’s really the cause for all her ‘doom and gloom’ lately. Simmons says that its because of their lack of precautions that Tripp died; but its more of her fear of what’s changed. Remember Simmons was the one who was so gung ho about analyzing Skye’s blood last season and finding out what made it special. So why is she now all of a sudden anti-alien tech.

Well remember earlier this season how she left when Fitz changed. Yes she came up with reasoning and excuses; but it was still handled very poorly. Now we see a similar poor handling with Skye and how Simmons keeps talking in front of her like she’s broken or something. Fitz on the other hand understands what its like; but he knows it just makes them ‘different’ and there’s nothing wrong with that.

Fitz has learned to appreciate what he still has and no longer bemoans what he’s lost; and that is why he is always trying to paint Skye a happier picture. He knows that if she learns to use her powers fully, she could have ‘Avengers level powers’. Change is scary; but that doesn’t necessarily make it bad. The only change that is bad is in Simmons, and it’ll be interesting to see how this plays out in the coming uprising episode. Will Mack try to recruit her too? Where will her allegiance ultimately side? Personally, I’m hoping for some good-ole redemption for Simmons. She’s an awesome character and if she overcomes her fears she’ll be able to return to the grounded yet inspirational team member. 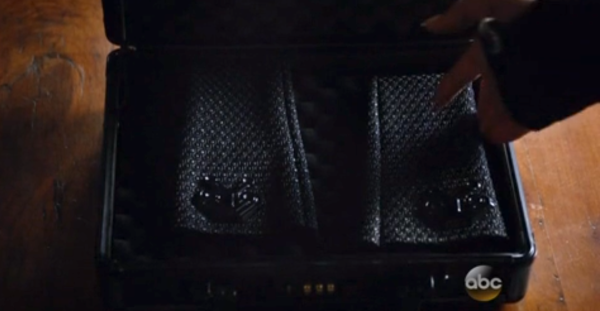 With SHIELD about to fight itself, it’s a good thing Skye is safe and sound in one of Fury’s old safe houses. Then again, maybe the laser grids aren’t enough to protect her when the new SHIELD comes calling – and you know they won’t be as lenient with her as Coulson. Skye’s only chance is to escape and try to figure her powers out on her own because if anyone can, she can. Then again, I wouldn’t be surprised if Gordon comes to find her. Though he wouldn’t come for Skye’s father; but rather to make sure Skye learned about her powers and better herself.

It’s so good to see all this dramatic build up and tension finally start to be released and the action kick back up again. So stay tuned for next week’s episode and I hope you enjoyed this Declassified!