Now that the Supergirl episode swap is behind us, the series can plow on ahead. AND with Supergirl receiving a full season order from CBS Monday, this week’s episode had to be big. Thankfully this week’s episode crushed it and not only added a ton of new levels of depth; but also gave new evidence to support this panda’s – and a few other’s – theory about Hank Henshaw’s true identity.

So let’s begin our Closer Look at Supergirl “Red Faced”

On a literal note, this episode’s title of course refers to its villain of the week, Red Tornado. Interestingly enough this character’s path in the episode followed much of his DC Universe counterpart, even down to being created by Doctor Morrow. The difference of course lies in the fact that once Red Tornado asserted his own independence and thinking, he became a hero.., rather than blown up by Supergirl. Scrap that hopeful new ally… literally.

Although the biggest enemy this episode had to be anger. Between homicidal drivers/ bigoted generals blaming Kara for something they started and Lucy Lane moving in on Supergirl’s – and Kara’s territory -, there was a lot for this heroine to be upset about. Though as with everything else with Supergirl, the writers did a wonderful job of alluding to Superman history while also adding depth and tying it all together with a neat little ‘Lesson of the Week’ moment.

Finding What Really Upsets You – Cat Grant’s Lesson Of The Week:

As usual, Cat Grant steps up and delivers this episode’s lesson: dealing with anger. Everyone snaps at people and misplace their anger; but Cat reminds us that we have to search ourselves for the real cause of our anger because if we don’t find it we’ll never be happy. Kara was able to do this this episode and in doing so opened up an entire new aspect of this show, Kara’s quest for a normal life.

This is why James Olsen was such an important romantic foil for her early on. He understands everything there is to Kara and is capable of hearing it all. So when he went back to Lucy, she saw her only chance at a normal open life go up in flames. As she recalls, the day her parents sent her to another planet her “normal” life ended and everything since has been one lie or another. Where this quest will go remains to be seen; but with Kara seemingly having used up her powers in her fit of rage, she might just regret being ‘normal’ now that the city expects ‘super’. 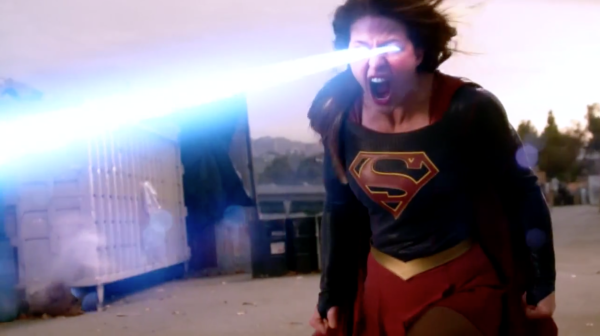 Early on, a commenter here expressed the idea that Henshaw could be Martian Manhunter. The more I thought about it, the more I fell in love with this theory and saw all the incredible repercussions it could have for the series. After all, people were expecting Henshaw to be Cyborg Superman since Day 1; but if the show flipped those expectations and had Henshaw as the shape-shifting martian in disguise that would not only give us an exciting curveball; but also set up the true reveal of Cyborg Superman being Kara’s father – which is his true identity in New 52.

Bit by bit we’ve been getting more hints that he could indeed be Martian Manhunter – glowing red eyes, telempathy, etc – but this episode gave us our best yet in the redacted DEO files concerning Alex’s father’s disappearance and Hank Henshaw’s involvement. Here we learned that Henshaw and Danvers went to South America to apprehend an alien; but neither returned until Henshaw showed up months later with no memory and not a scratch on him. What if the man that returned wasn’t Henshaw at all but rather Martian Manhunter in disguise. *fingers crossed even more*

Next week, Kara will find out what it’s like to be “Human for a day”. Sadly this will also be paired with a massive earthquake as well as the arrival of another alien escapee named Jemm. So come back next week as we find out how Supergirl will deal with the new threats and what new secrets are revealed about Henshaw and the other mysterious characters in this series.