The Holiday Seasons is upon us as well as the end of 2015; and we’ve seen some incredible Cosplayers this year! And whereas Cosplay isn’t a competition, there are some who truly rise above in professionalism and spirit. All of our Cosplayer Of The Month honorees have a good combination of these; but for Holiday 2015 I wanted to feature someone extra special.

Two of the greatest gifts that Cosplay can give is allowing you to make your dreams a reality and putting smiles on peoples faces. And if you’ve already heard of this month’s Cosplayer, then you know she’s a Master of both! So let’s end 2015 on one of the highest notes possible and get to learn about the incredible DeAnna aka It’s Raining Neon!

Since little, DeAnna loved drawing and sneaking upstairs to play Atari. And like most kids, DeAnna always loved playing dress up; but she rarely went for those run-of-the-mill costumes you’d usually find at Party City. Instead of dressing like Snow White, she instead chose to dress up like one of the Seven Dwarves. With no real costumes like this at the time, young DeAnna and her mom got to work making everything from the beard to the little jumper. Because of this groundwork, DeAnna has always maintained the spirit of building things her costumes and the importance of family. In fact, family would be her official start of Cosplay as well!

Growing up, DeAnna’s cousins were very much into the Convention scene and one year they asked if she wanted to go with them. She of course accepted but wondered: “What if I made these designs? What if I could dress up as my favorite characters, but not just for Halloween?” Her cousins then laughed and told her that there’s actually a name for that kind of thing. “It’s called Cosplay and it’s not as weird as you think it is”. At first DeAnna couldn’t believe her ears! She thought they were pulling her leg; but then DeAnna got to work on her first costume for her first convention and the rest – as she calls it – has been “an unsung whirlwind romance of costumes and me”!

Now as far as how she chose the name “It’s Raining Neon” – or even chooses her costumes – again we must go back to the early years. Back in Highschool, DeAnna’s nickname was Neon. She was a huge science/book nerd and was also really into the rave scene, so between that and convention going the name stuck. And “FUN FACT!” as DeAnna interrupted, “It actually does rain Neon on Saturn in the atmosphere!” #ScienceFactsInVeryLiteralNamingForm As for selecting her costumes, that process is a little – ok a lot – more intricate.

Between all the games, films and shows she’d watch as a kid, you can imagine she has a pretty massive ‘Cosplay Folder’; but due to time and money constraints, she has to narrow it down. She’ll usually make a tier system out of them and rearrange depending on feasibility, importance and whether or not she has a friend who wants to do a group Cosplay. Although when it’s a character that she really loves, she finds herself with a different problem – her own criticism.

“When it’s a character I REALLY LOVE, I get really picky about my skill level. I think very highly of my favorite characters, so I want to deliver that same sort of respect back as a fandom.” – It’s Raining Neon

This is why the projects she cares the most about also happen to take the longest; but that’s how it should be! For example, growing up DeAnna was a huge fan of the Star Wars Extended Universe and fell in love with the character Mara Jade. As she recounts, “my friend had to put up with me jumping off rocks with a giant stick like I was a Jedi. So now to be able to literally bring that character to life is really awesome!” It’s only natural to want to give back to your deepest fandoms as best as you can! Though it’s not just the look of the costume she tries to get right, but rather the look, feel and spirit of the character! 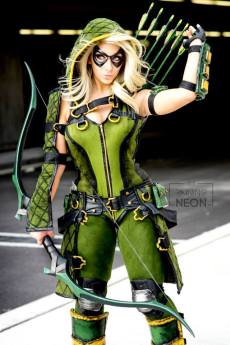 Creativity and artistic vision can’t be created, but they can be sharpened. Early on DeAnna was self taught – and keep in mind this was all before the plentiful How-To videos of Youtube. So when she entered College, she chose Media Arts and Communications as her major. She spent her undergrad years learning everything there was to learn even partially related to this: photography, game designs, visual graphics, fashion and more. By combining all these ‘by the book’ techniques with her own creativity and imagination, she’s been able to bring her characters to life like never before as Cosplayer, Model and Photographer!

Originally, DeAnna wasn’t too comfortable with the idea of being called a ‘model’ for her Cosplays. Instead she merely saw herself as the “canvass the paint goes on”. Although she’s learned to be more comfortable with it and uses it to make the final product that much better! Now Cosplaying/Modeling might not be too rare; but Cosplay/Model/Photographer is. DeAnna strives to take as many of her own pictures as she can, which not only helps from a business standpoint as photo rights can get messy sometimes; but also because it allows her to fully represent her character. Because of all this she is able to take an image in her head and LITERALLY show people what she means.

In this way she is able to show people not only what it should look like; but also what it should feel like. Although striving for such perfection is tough and many times she ends up scrapping shoots others would keep. For example, she had to do three different shoots of her Sniper Wolf outfit before she got photos she thought were good enough. She will do anything and go anywhere to get the perfect shot. This is how her neighbors got to know about her cosplay! There’d be many times they probably saw her run out into the woods in various costumes; but once they learned about her cosplay art, they were all to happy to let her use their backyard and pool for any shots she might need. 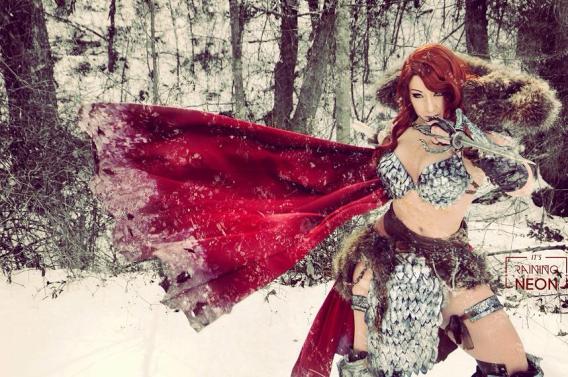 For DeAnna, Cosplay is simply fantastic. Though what really makes it so grand is what it can do for everyone as a whole!

“For me, it’s very much an art. A lot of the technical skills have challenged me to grow, taught me to overcome things, to be patient, to learn from my mistakes and allowed me to make some of the greatest friends I’ve ever had!… It can do so many different things for so many different people in so many different ways that it becomes more than just a hobby of crafting; it evolves into something so much more!” – It’s Raining Neon

In short, it’s basically like some kind of “cute, magical, hand-holding Kumbaya”. Cosplay is able to bring all types of people together; and allows introverts and extroverts alike the chance to liver, learn and grow together!

When it comes to picking her favorite Cosplay, that’s a little difficult. Remember her extensive Cosplay Selection process? Well since everything she makes is so rigorously chosen, each is her favorite in some shape or form. Although her favorite of the moment is her Kelly-087 Cosplay from HALO. In fact, lately Armored Cosplays have become her favorite type of costumes. If she’s “armored up to the point where all you can see is [her] eyeballs, that’s almost perfect” for her! And her Kelly costume was pretty close to that. 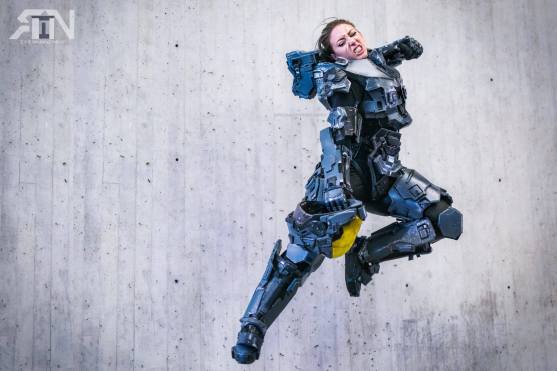 Although the greatest aspect of her Kelly suit is how surprisingly mobile she made it. Most armor suit are hard to walk in, let alone crouch in. And yet DeAnna was able to jump and punch in her’s! After all the work she put into it – and “1 month of debatable amounts of sleep” – the greatest moment for her was one day after New York Comic Con when she paused and saw her costume for the first time in its entirety reflecting in the glass. Though despite how intricate and encompassing this armor is and how much she loves full armor, she reminds us that just people who try to make more revealing armor put just as much work into their projects as well. Armor is armor and the work, time and effort that goes into it is to be respected regardless.

In the end, this is why I wanted to feature DeAnna above all others for Holiday season 2015. If you’ve ever met DeAnna in person or followed her FaceBook Page, then you know she’s a ray of sunshine. And with heroes like Lucille Ball, Mel Brooks and Charlie Chaplin, it’s easy to see why. In fact, her favorite quote is from Chaplin who once said “We want to live by each other’s happiness, not by each other’s misery”, which explains how she always knows how to brighten a day with her posts. From science humor, puns and stupid humor to uplifting and motivational pep talks, she’s got it covered! 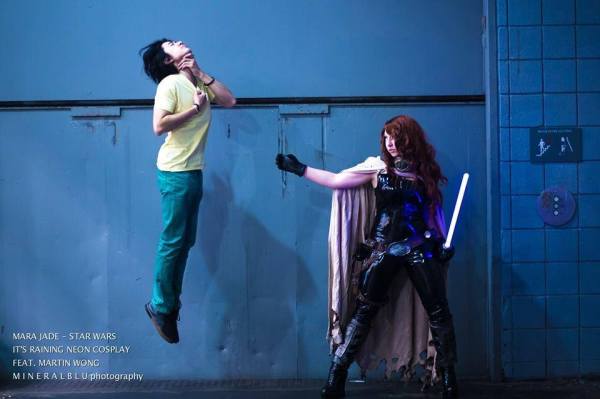 Although this is a Holiday article after all, so what are DeAnna’s thoughts on the Holidays? Well Thanksgiving might kick off the season; but DeAnna admits that her Thanksgiving is never that big a deal and is usually like the “video game that is always getting patched”. And considering how much DeAnna likes to cook, that’s strange. Although she admits anything she makes has a “50/50 chance of being either gourmet or on fire.” But when it comes to the December Holiday season, the cooking gamble is worth it because there’s just that feeling in the air.

“There’s something about this particular time of year where it brings out some of the better pieces of humanity. Besides the smell of cinnamon is in the stores, everyone is nicer to each other and there’s that warm fuzzy feeling in the air. It’s almost like there could be magic in the air – and I mean that in the least cheesiest way” – It’s Raining Neon

So what’s next for DeAnna? Well her next new costume has actually been done already and is just sitting in the closet waiting to be shot. This costume is one people have asked her to do for a long time, Meryl from Metal Gear Solid – one of her favorite games of all time. Beyond that she’s aiming to make a new armor cosplay based off of Final Fantasy XIV Shiva for Katsucon 2016. So be sure to like her on Facebook and Twitter https://twitter.com/ItsRainingNeon to keep up to date. You might even see some guest posts from her Page Admin – and Feline Overlord – Sergeant Major Mittens! And thank you again to It’s Raining Neon for sitting down with me at NJ Comic Expo and giving one of my favorite interviews yet!