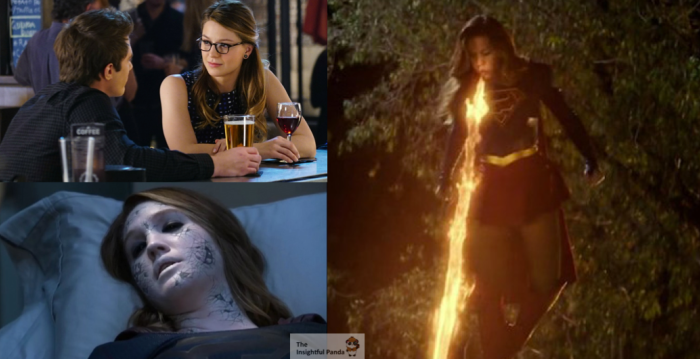 After set up after set up, we finally got the long awaited Supergirl vs Bizarro showdown! Now contrary to what some might think, YES that is Bizarro. There is indeed a Bizarro version of Supergirl and since we haven’t met a Bizarro version of Superman in this universe yet, it only makes sense for this to be Bizarro #1. As for changing origins and such, the creation of Bizarro here is almost identical to that of the origin in Superman: The Animated Series and some comic continuities.

Supervillain-naming aside, this episode dealt wonderfully with reversals of ‘business as usual’ while also catapulting Maxwell Lord to the highest levels of ‘villain’. In fact, this episode didn’t set him too apart from Kara’s evil uncle Non. All this and more as we take a Closer Look at Supergirl “Bizarro”.

Needless to say, this episode title is directly talking about the villain of the week, “Bizarro”; but having a half-clone of Supergirl wasn’t the only “bizarro” thing going on this episode. From Cat Grant getting Kara coffee to Winn telling James to grow a pair and tell Kara how he feels, everything this episode seemed a little backwards. Though whereas things did swap back to normal at the end, there’s an overwhelming feeling that big changes are going to come. For Cat, it seems like she will be even harsher and standoffish from Kara, since she just rejected her son. As for James, he was on his way to see Lucy – whom he’s still dating – but the overall feel seems to point to that ending very soon.

“What Am Me?” – Identity Crisis & Conflicting Minds:

Everything considered, having Bizarro as the villain of the week was fitting in more ways than one. Beyond what I mentioned above, Bizarro was dealing with a conflict between what she was (used to be) and who/what she is now. Is she an experiment? Is she Supergirl? Is she the Jane Doe? The answer to each of these are hard to answers, and even when we start getting a clear idea, we then see another aspect of her come into play (ie: calming to James, but then snapes, AND YET doesn’t hurt him). Yes she is very much a new creation all unto herself, but Lord’s conditioning and Supergirl’s inner goodness struggle so fiercely within her that she doesn’t know which way to turn most of the time – which isn’t too different from Kara this episode.

As we saw here, Kara herself was torn between two very different paths. On one hand, she really liked Adam and wanted to be with him; but on the other, Supergirl duties – and influence from Lord – forced her to push him away. Is Kara Supergirl or is she Kara Danvers? Can she honestly be both? Being Supergirl always made scheduling difficult but now there’s also the threat of someone getting to those she loves. This problem isn’t going to get any easier for Kara as time goes on. If only J’on could wipe Lord’s mind. . .

At first glance, I was afraid the tentacle thing in the post credits was this universe introducing the Starro, a starfish-like alien that can mind control people. Though that seemed a little ‘too soon’ since we already dealt with identity and rogue Supergirls this episode. As next week’s preview kicked in, we learned that this was actually in fact the Black Mercy – an alien plant that renders you unconscious whilst giving you your deepest desires.

How did the plant get there? With Aunt Astra, did her or Non see it as ‘peace offering’, something to keep Kara out of their way but also keep her happy? Guess we’ll find out as well as what is the ‘item’ out of place that snaps Kara out of it. So see you next week for the next Supergirl!