This past weekend, Heroes & Villains Fan Fest returned to the Garden State as promised after their initially planed weekend back in January got mostly snowed out. Though considering last time was quite fun and ended with me interviewing Teddy Sears, I was expecting big things this time around and HVFF did not disappoint. It was an incredible weekend – which you can read all about in my Event Coverage article – but one of the biggest highlights was my Interview with rising Arrow star Echo Kellum aka Curtis Holt.

We were first introduced to Curtis this past season as an employee of Palmer Tech, but as the season progressed it was clear he was becoming “someTHING else”. Between a brilliant mind, peak athletic form and an incredibly optimistic/ humorous attitude, it was quite clear this new character was a “Terrific” addition. And now with Season 4 behind us and Season 5 getting ready to begin, Curtis has been upped to a Season regular and there are quite a few things in store for him.

So let’s see what amazing things await both Echo and Curtis in the future – as well as who’s funnier on set, him or Emily Bett Rickards.

Now back in Season 4, as Curtis became more involved with Team Arrow, we saw him struggle between two paths: being a member of Team Arrow and being a good husband. The family dynamic is a hard line to walk sometimes as we’ve seen Diggle himself struggle with this choice; but Curtis comes at this from the other end. Instead of a crime fighter now balancing a family, he’s a family man who’s looking into crime fighting. So what would it take for Curtis to step up full time?

Well Echo reminded us that no matter the situation, Curtis always leans towards the side of good for the pure sake of good. Whether it was how we met him – as the man who’s invention to determine raises was used against him – or later as the man who restored Felicity’s ability to walk, that’s just the kind of man Curtis is.

“It’s just an undying effort to help the city be better, [it’s an effort] to help thwart darkness. So as things progress and the Light seems to dim [in Season 5], I think Curtis will take action.” – Echo Kellum

Though if Curtis is to join Team Arrow Full-Time and fill the void left last season, you know he’s going to be out in the field. He might be a tech guy, but he’s also a world class athlete and we’ve seen him use those skills a few times this past season, whether it be dodging bees or taking on a blackmailed Roy Harper. And if he’s going out in the field, then he’s definitely going to need some “identity concealment” – and that’s precisely what Echo is looking forward to most next season!

“I would say you can absolutely expect me to suit up next season. I’ve wanted that so bad and when it comes to what I’m most excited for, suiting up. Suiting up 100%… I haven’t seen anything specific yet, but I’m very excited to see what’s in the mix and what the writers have in store.” – Echo Kellum

And Echo has good reason to trust the writers since they’ve worked wonders in the past with his character. For the past 8 years, Echo has consistently been studying and working in comedy – whether in classes or performing – and he says that the writers are able to form this “perfect symbiosis” with each character/ actor.

Though despite there being some similarities between his character and Felicity, he assure us that from an actor standpoint, his co-star Emily Bett Rickards still wins the award for natural comedic talent.

“I like to bring something unique to the table with Curtis… but people like Emily don’t have to train at all. [They’re] just naturally really funny and great. It’s so much fun playing off of her and seeing the dynamic between her and me.” – Echo Kellum

Hot off the tail of this weekend’s Heroes & Villains Fan Fest, the Arrow cast jumps back to work this Tuesday when filming for Season 5 begins. Though beyond that, Echo also has been busy with some non-Arrow work such as a movie called Village People starring Aya Cash, George Basil and himself which filmed in Nicaragua. Additionally, he’s also part of a movie coming out next February called Girlfriend’s Day, which was written by Bob Odernkirk whom you might know from a little show called Better Call Saul – and of course Breaking Bad. All in all, exciting things coming up for Echo in the 2016 – 2017 Season, and we wish him all the best!

Arrow returns this Fall, Wednesdays at 8:00pm on the CW. Again, a very special Thank You to Echo Kellum for taking time to speak with me and welcome to the Panda Pal Family Echo! We might not know your on screen costume yet; but until then, hopefully you find this Thank You Gift “Terrific” enough 😉 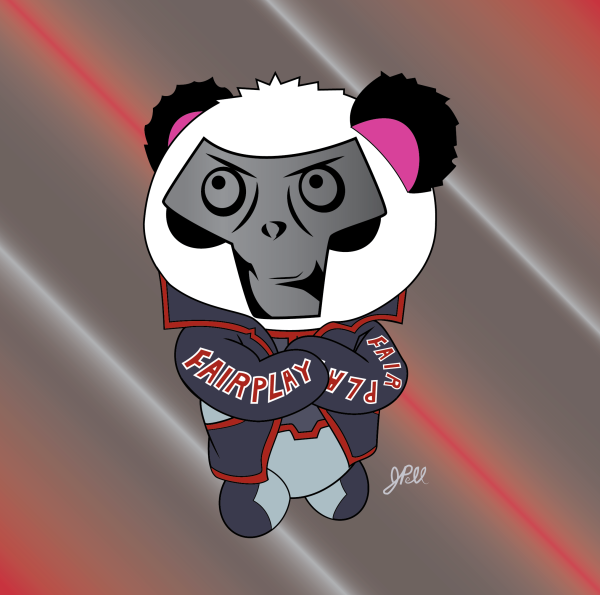