We all know that Supergirl, The Flash, Arrow & Legends Of Tomorrow are supposed to have a massive crossover later this season; but it’s just become amply apparent that this Fall Season will see the main Arrow-verse shows have a massive intertwined story arch – and it’s all thanks to the Season 2 premier of Legends Of Tomorrow. Like last season, this one kicks off with tying the series to Arrow, but as episode ends we find a major reveal that throws all Easter Eggs out the window and replaces them with a sustained major threat. 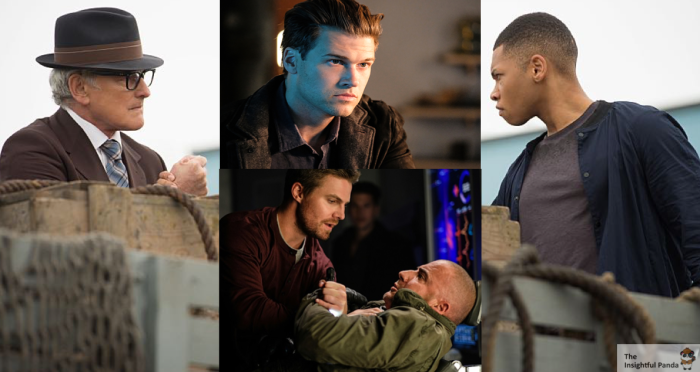 Transitioning From Season 1 To 2 – Dealing With 3 Major Season 1 Remnants:

Much like The Flash and Arrow have already done this season, Legends Of Tomorrow would also have to deal with the 1-2 punch of catching viewers up on what happened between seasons while also setting up the Season ahead. Though much like Supergirl – perhaps due to both shows starting a week after The Flash and Arrow – Legends Of Tomorrow was able to accomplish all of this in one episode.

As the episode begins are reminded of three key points from the end of last season. First off, the Time Masters are gone and now Rip and the gang must serve as the new Guardians of Time. This is of course shown through flashbacks as they’ve been chasing a particular band of time bandits who seem to not only have a good grasp of time, but are also able to slip in and out fairly unnoticed. These time bandits are later revealed to be Damien Darhk and Eobard Thawne, which explains both the extensive resources as well as the knowledge of time. Whether or not there is a third party involved remains to be seen.

The second item of unfinished business we have from Season 1 is how Sarah Lance learns about Laurel’s death before the final battle. She has yet to have enough time to process all of this and is currently on a mission to get revenge and hopefully bring Laurel back – after all, her sister did it for her. And finally, we have the warning that the Legends would die if they traveled back to 1942. On most shows, a warning that dire could lead to a season long – or longer if you’re Doctor Who – storyline; but here Legends tackled that warning halfway through the episode. Even the “putting the team back together” phase could have been spread out, but instead was tackled in record time. That is because whereas these could be great stories for the season, this season of Legends of Tomorrow is aiming at something much bigger – something that can / and has already caused a massive bridge to form within the Arrow-verse.

As I mentioned earlier, when Season 1 of Legends kicked off we saw some poignant interactions between some Legends and the main cast of Arrow. So it was only fitting that Season 2 kick off in a similar way as Oliver is the one to get the Legends back on track… at least partially. Through Oliver a new Legend – or Legend to be – is added to the roster in the form of Dr Nate Heywood. Though the Arrow tie-in doesn’t end there as we see Sarah on the hunt for Damien Darhk, the ageless main villain from last season. As it turns out, Darhk is someone tied to the Nazis getting their hands on a nuclear bomb in 1942 and hitting Manhattan, but his involvement doesn’t end there as we later see that he is one of the major players in this Season’s action – the other being another formidable and familiar face: The Reverse Flash.

As Flash fans saw on the Season 3 Premier, after the events of Flashpoint, Eobard Thawne sped off telling Barry that they’d see each other again real soon. I discussed in length during that episode’s Closer Look how it was unclear whether that final Eobard was a time remnant that’d soon disappear or the start of a whole new timeline. As it turns out, it might actually be a “Temporal Pause” – if I can try to apply Doctor Who logic here – or no change at all. TO THE TIMELINE! 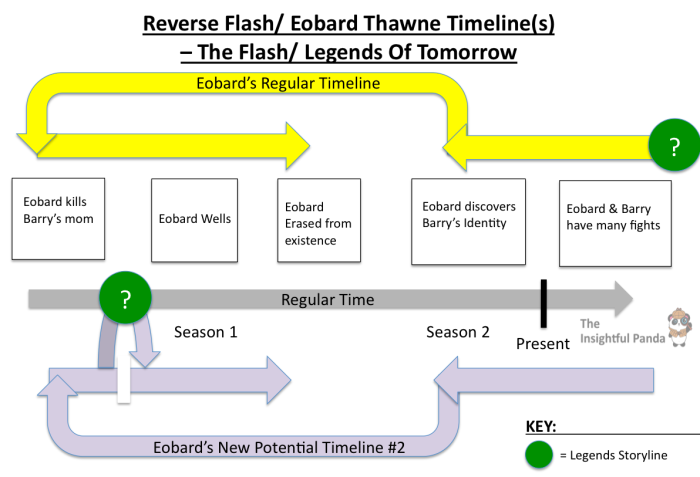 As you can see above, there is Eobard’s usual time progression. He comes from the future kills Barry’s mother, and then gets stuck in the past and proceeds along The Flash Season 1. Knowing this – and still being uncertain about that new timeline – one of two paths could be taken. The first is that the Eobard we see now is the Future Eobard, or rather the Eobard from the future that has yet to kill Barry’s mom. If this is the case, then this would explain how Eobard in the Season 1 Finale of The Flash knew of Rip Hunter. This explanation works whether the Eobard in Flashpoint disappears or remains. The alternative is that Eobard does still remain after Flashpoint and goes off to do all of this NOW that he’s free of his fate. Although how could the timeline still be intact you might ask?

Well if Eobard went off on his time travel adventures against the Legends post Flashpoint but still returned to the night he killed Barry’s mom, everything would remain intact. In a sense, the timeline of events remains the same because he didn’t cause a new timeline but rather took a slight detour before returning to the set course. This would also explain how Eobard knows of Rip Hunter since if he did U-Turn after his Legends Adventures and return to the normal timeline, all of this would have happened PRIOR to Season 1 finale of The Flash. Okay, that’s enouh time travel for one article. Either way, having Darhk and Thawne team up was a BRILLIANT call and I can’t wait to keep watching this season.