With Captain Cold gone, we started to wonder if we’d ever get to see the Rogue’s Gallery again. Well this episode gave us two famous Rogues – Mirror Master and Top – but that wasn’t all. Jesse Quick took the field, the team searched for a new Wells and the Caitlin mystery grew even further.

So let’s take a Closer Look at this week’s episode of The Flash titled “The New Rogues”. 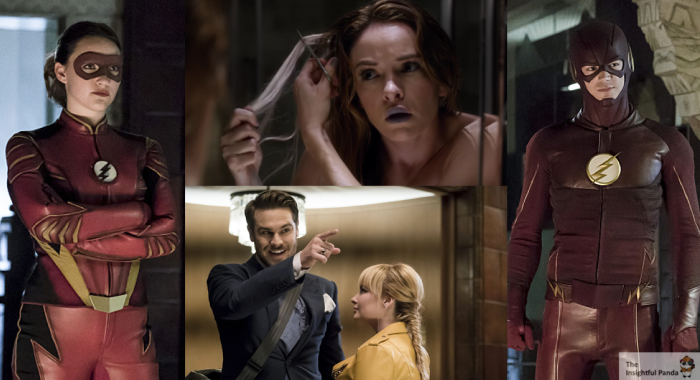 This week’s episode started with a brief flash to 3 years ago, on the night the particle accelerator exploded. Why? Well for starters it was to give backstory on how Mirror Master and Top got their powers but it was also to set the stage for why he was so consumed with wanting revenge against Snart. Mirror Master couldn’t move on and in the end it was that fixation that allowed Team Flash to trap him. Though it wasn’t just Mirror Master that was having trouble moving on.

With many problems left on Earth-2 left to solve, Harry knows the team needs him but at the same time can’t exactly be him. So with that in mind they set out to discover another worthy Harrison Wells from the multi-verse and they found him… at least it seems for now. Harry is worried that this Earth-19 version of him would replace him and that makes it that much harder to move on. Add in the fact that his daughter and Wally are getting closer and it seems like the Wells family as a whole is reluctant to move on; but they must. Though the Wells family isn’t the only one with trouble moving forward.

This episode also saw Barry and Iris getting much closer but still a reluctance – or rather fear of awkwardness – between Joe and Barry. To be fair, I can completely see Barry’s side of things; but Joe is having some romantic trepidations of his own as we meet Cecile. Joe and her certainly have some chemistry, but we also see Joe keep chickening out of it. We learned Barry’s reason was fear of screwing up now that he feels he has everything; but what about Joe’s? Perhaps we’ll see as the season continues.

Considering the episode’s ‘previously on’ segment showed Caitlin’s powers, we knew this episode would bring them up again. Though we didn’t expect them to be dealt with so much as there was episode importance and post credits importance. When we learned that ‘cooling’ would be needed to free Barry, we knew Caitlin would step up; and as a result it seems like Earth-2 Harry knows something is up. Additionally, he probably suspects Caitlin since his Earth-2 Caitlin was Killer Frost. Perhaps his final words was something to remind them that you don’t HAVE to be your doppelgangers – but that’s neither here nor there.

As the final scene shows, Caitlin’s powers are growing and have started to give her the infamous Killer Frost look – and she knows it. The blue lips and frosty blond hair seem to go hand in hand with these powers. I’m still holding onto my “Caitlin becomes Ice” theory – and it could work if Caitlin keeps cutting her frosty blond hair short as she’ll have the classic Ice look down.

Admit it, you can kinda see it too. *crosses fingers*

The only remaining thing we need to be on the look for is her mother getting involved. Remember Killer Frost said that her mother was a big reason she turned evil and cold. Perhaps this even explains why Caitlin in Flashpoint was a Pediatric Ophthalmologist. Maybe that was what she always wanted to be but her mother forced her to be more. Either way, hopefully our Caitlin is strong enough to resist any momma drama – or not get involved at all. *fingers still crossed*

The Flash returns next week with Barry taking on a giant monster and some mistrust of the new Harrison Wells. And considering how quickly Caitlin’s ice powers seem to be growing, I’m willing to bet we’ll get some more answers next week. So stay tuned!