Last week’s episode of Arrow left off on two very big cliffhangers. As if Lyla coming to ask Oliver for help breaking Diggle out of jail wasn’t enough, Felicity told the man with the 5000 year old unstoppable rags that she was the one responsible for nuking his home town. Is Oliver going to jail? Is Felicity about to be strangled by 5000 year old rags?

This episode answered all those questions rather amicably; but then ends with something that could spell the end for Oliver Queen. So let’s take a Closer Look at Arrow, “Penance”. 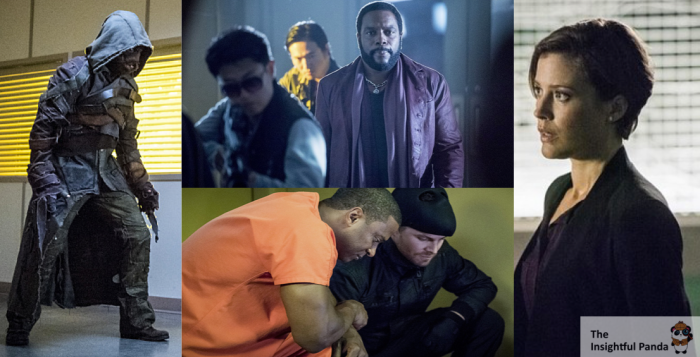 With the episode title like “penance”, you knew this episode would deal with people’s guilt and how they would make amends. Though to be fair, you didn’t even need the title considering how last episode ended. Diggle is punishing himself for killing his brother and Felicity is being crushed with the guilt due to her role in the death of Rory’s family. Similarly, even Rory is dealing with these feelings of guilt as he is burdened with his lost every time he sees Felicity. So how can these characters move forward? How can they live knowing they will have to deal with more impossible situations in the future?

The solution of course is being heroes and trusting on those around them. Felicity and Rory spell this out the best as Rory decides to move forward and honor his father while also make sure Felicity doesn’t get crushed under guilt. Meanwhile Felicity will continue to make the tough calls but has to make sure Rory doesn’t get crushed under the weight of his loss either. By both of them working together for Team Arrow and watching out for each other, they will be able to make amends. And this is the same remedy for Diggle as Oliver points out. If he wants to make amends, he can do it better as Spartan than as an inmate on trial for something he didn’t do. Additionally, Diggle and Oliver will be there for each other like Felicity and Rory will be. Oliver will make sure Diggle stays true to his family and the man he is, while Diggle reminds Oliver to always be himself.

This week’s Flashback detailed Oliver getting into prison and interrogating someone connected to his target. Like all the Flashbacks this season, this one was spot on in multiple ways. For starters, Oliver getting into a prison is similar to what he’s doing now for Diggle (albeit in a different ay). Though the real parallel lies in his interrogation method, which is repeated almost verbatim by the new DA when interrogating one of Church’s men. Oliver’s method was of course more effective, but is this to signify that the DA will follow a similar path and try to become a vigilante like Oliver? By episode’s end we already see him changing his stance on vigilantes, so it could be possible.

Though that idea might have to wait because there is a 2nd non-flashback interrogation scene in this episode and it stands to be just as effective as Oliver’s. I’m of course talking about Church’s interrogation of Wild Dog. We saw the preview for next week and it looks like Wild Dog will eventually be forced to give up Oliver’s identity.

The preview for next week’s episode confirmed our worst fears before we even got to fully fear them… Church makes good on his promise to break Wilddog and learns that Oliver is Green Arrow. Now we of course know that Oliver lives and will probably come up with another ‘fake his death’ / clear his name plan. Wouldn’t be his first… or even his second.

So tune in next week to see how Team Arrow can take on this latest threat as Church – and Prometheus – set their sights on Mayor Queen.