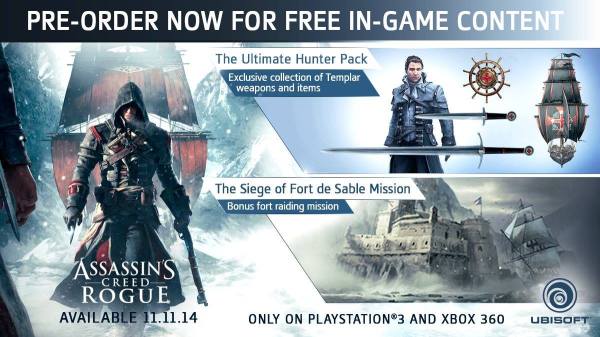 If you Pre-ordered Assassins Creed: Rogue, you probably received the Ultimate Hunter Pack with the Siege of Fort De Sable Mission. In fact, even if you didn’t preorder, the version you picked up was most likely the Limited Edition that came complete with the bonus content. So what’s to stand in the way of you and your unlockable content cutting down some Assassins? Just one, the items don’t show up!

Fear not, your items are safe. After talking with Ubisoft and road testing myself, this Panda is on the case. So here’s everything you need to know about claiming your preorder bonuses.

Unlike some previous unlockable content, these items and side missions don’t come independent of each other; but are actually one in the same. So your mission – if you choose to accept it – is to raid the fort of these items; and here’s how you do it.

It’s important to note that this might seem like a small restricted area island; but it is actually the back entrance into a massive enemy base – complete with an Assassin leader. There’s tons of guards and depending on how many enemy base raids you’ve done, this might be your first foray into a true Assassin combatant – complete with guns, fleeing, smoke bombs and more.

In addition to the 3 Mission Chests, there’s also a Viewpoint to Sync and 3 normal Treasure Chests. So have fun exploring because once this mission is completed, you’ll have gained access to the Templar Stealth outfit, swords, wheel, and sails. Go with stealth, or attack with guns blazing. Totally up to you; but either way this is how you get your rewards from the Ultimate Hunter Pack – aka The Templar Pack.

Now I’m sure some of you might be asking about the other preorder bonuses such as the Commander and Officer Packs. These will most likely become available as DLC; but if they were received as pre-order bonus I assume it’s a standard issues of these appearing in your inventory. No one’s asking questions about them so it’s safe there’s no problems with these. (Edit: Just received my first question on these, but I assume these would function like Fort De Sable and become available after the raid)

As for Sir James Gun’s Armor, that preorder bonus for the Collector’s Edition apparently revolves around searching the map for Templar crosses, which can later be used to unlock the armor. I’m sure this will be released as future DLC as well, so no need to fear if you couldn’t find a Collectors Edition.

Hope this answered a lot of your questions. If the items don’t appear in the fort for whatever reason, try reentering your Redeem Code – perhaps your system never downloaded it. As for any Uplay reward questions, Ubisoft is currently looking into that problem and it’ll be up and running in no time. If you have any other questions about the game’s tech side, here’s a link to Ubisoft’s Support Page to report/inquire about any and all possible glitches you might experience.

As for me, I’m loving the game thus far and have already begun my Tips & Tricks Guide for Assassins Creed Rogue. So again, let me know what you want help on. Armor perks? Legendary Battles? Conquering The Map? Sound off in the comments below!

*Special Thanks to Ubisoft for their very fast and in depth reply to all my questions.