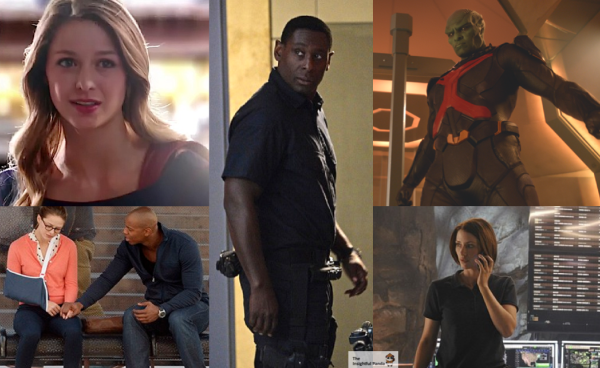 They did it! They did it! Supergirl actually went there! If you’ve been following my Closer Look articles, then this week’s big reveal should have come as no surprise. And yet, it was still done in such a brilliant and satisfying way that we can’t help but cheer in excitement! Though just because Henshaw’s true identity was revealed, don’t think that means the suspense and gravitas of this series is over! On the contrart, the fun and heart of this series is just beginning.

So let’s take a Closer Look at this week’s epic Supergirl episode aptly titled “Human For A Day”.

Feeling Human – Powerless, Afraid & Yet Capable Of Being A Hero:

As the episode title suggest – and as we learned at the end of last episode – this episode focused on Kara being powerless. As we predicted, her last battle with Red Tornado used up all the stored solar energy in her cells and until they’re recharged she’s powerless. What could go wrong right? Well, everything. With earthquakes and robberies happening all over the city, Kara bemoans what it is to be human. But is that really a bad thing?

We see how Kara is absolutely powerless/fragile Kara is, and how heroic deeds she could once do are now impossible. And because of that people die. Though as Maxwell Lord and Cat Grant promoted this episode, humans might be powerless but they can overcome by working together and standing strong. Kara finally accepts this and does her most heroic deed ever – talking down a gunman without violence – without the safety net of powers. She didn’t threaten or scare while pretending to still be powered; but rather appealed to his humanity. Though we knew Kara could still be a human while being human; after all, another character has been doing it for years.

If you are one of the people saying “why name him Hank Henshaw if you were going to make him Martian Manhunter? That’s Cyborg Superman’s name!”, then you probably don’t understand how misdirection work. You see, Hank Henshaw died years ago trying to apprehend the Martian Manhunter. So the Henshaw we’ve met until now was NEVER the real Henshaw. Now sure Henshaw could be alive and rebuilt as a Cyborg – completing that comic story – but that would be a waste. Considering the actor never saw much motivation in a basic ‘I hate Superman/girl” character and the fact that the New 52 offers Kara’s father as Cyborg Superman – something that would fit in much better with this series – there are much better options. And the reveal of Martian Manhunter does so much as it is!

They’ve been building up Henshaw as Martian Manhunter in disguise so well and they captured his forlorn sadness perfectly. Though the most incredible part is how he’ll play into Kara’s and Alex’s story. He is a father who lost his family and the rest of his kind. Kara and Alex have lost their fathers – and in Kara’s case, her kind as well. Even if he didn’t spell it out for us – which he did – Martian Manhunter playing father to Kara and Alex is a wonderful way to flush out this new family dynamic. This explains why he never wanted Kara or Alex looking into too many things or being a part of battles they didn’t have to be a part of: he was worried about them.

Now as of the moment, only Alex knows his secret. And if you’re wondering who the ‘other’ he mentioned, I believe that was Alex’s now dead father. Where this will go from here and what’s coming next for John, Kara and Alex remains to be seen. But with next week’s episode returning Astra to the battle, we should get brilliant details on the bigger plans emerging. So stay tuned!