Much like this week’s episode of Arrow, this week’s Legends Of Tomorrow was a bit more toned down in order to set up for the massive Supergirl, The Flash, Arrow & Legends Of Tomorrow Crossover Event the week after Thanksgiving. Though despite this heavy burden, this episode still ended being not only incredibly fun but also set up some great future twists and powerful character development.

So let’s take a Closer Look at Legends Of Tomorrow “Outlaw Country”. 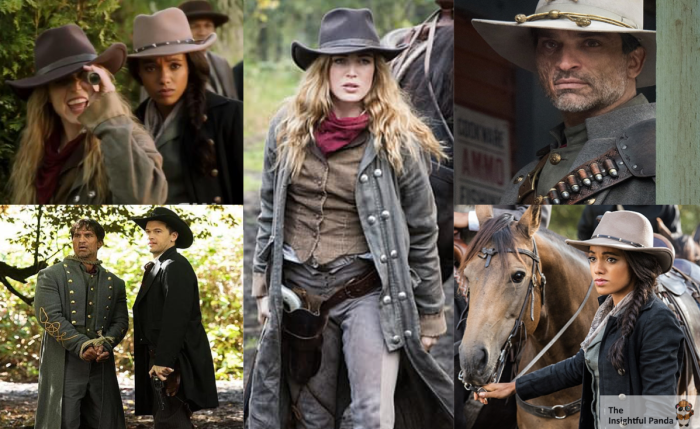 Things You Can & Can’t Control – Vengeance & The Beast Within:

This episode set up two very unexpected juxtapositions, and each revolved around the idea of learning the difference between “things you can and can’t control”. Another similarity between these two juxtapositions is how they both involve two characters who piss each other off. The first of course is Sara Lance and Jonah Hex. Much like Captain Hunter before her, Captain Lance doesn’t seem to be on Jonah Hex’s good side either at first. Though instead of it being a case of past history, it’s more of a case of “history of the past”. Jonah is living in the Wild West and the idea of a woman giving orders wasn’t exactly common back then. Though as she does in every situation, Sara showed him who’s boss.

Though what really brings these two together is their desire for vengeance and whether or not they let that vengeance control them – or they control it. Hex is on a rampage trying to take down Turnbull, but he’s so consumed with revenge that he’s not listening to reason. He can’t wait for a thought out plan. He wants revenge and he wants it now. Sara similarly has been there and done that – and we’ve seen it. Two missions now have almost been ruined with Sara chasing Darhk, but like we saw last week in “Compromised”, she found the strength to control that vengeance and do what’s right. She still crushed Darhk’s world, but she didn’t destroy the timeline with it.

The other juxtaposition this week was between Rory and Amaya, and since Amaya first climbed aboard in the episode “Shogun” she’s been gunning for Rory. From thinking him Rex’s killer to seeing him as just an uncultured slob, her opinion hasn’t changed that much of him…. Or has it? We’ve seen warm moments between the two before – like when she returned with proof of ninjas – but knowing what Mick Rory is thinking has been something even we the audience have struggled with. Sure he’s our favorite quote-master, but he’s also gone rogue sometimes when his desire to ‘sit back and watch the world burn’ mentality resurfaces. And drinks with Turnbull certainly reminded him of that.

Is he the Legend that fights for the team and merely puts up a tough front, or is he the criminal who occasionally acts a hero. Well thanks to Amaya, he learns that even if he is a raging beast, he can still use those tendencies for good. And Amaya of all people should know this best as she took has a beast within her – or rather beasts. Having the entire animal kingdom at her disposal takes a lot of discipline. Imagine how you’d be stuck in traffic and someone cuts you off. Would you go all Rhino on them? Amaya knows how and when to let the “beast” out and she reminds Rory that he can too.

The dual juxtapositions (Sara with Hex & Amaya with Rory) perfectly paid off in the end as we simultaneously find the first (Sara & Amaya) stopping the second (Hex & Rory) mid beating and reminding them to control that vengeful and beastly natures within them. Who knows, we may see Jonah Hex again; but we’ll definitely see more of Rory dealing with his beastly side – and as always, we can have faith that he’ll come through in the end. And now we have Amaya to make sure he does!

The final things that needed to be accomplished before the Invasion Crossover event could happen were Ray getting his Atom suit back and Nate getting his Citizen Steel costume. Well thanks to all the Dwarf Star alloy of this episode, both have been achieved. And considering how much there is, Ray’s suit will be even stronger. So now we’re all ready for the major Crossover – and it seems like the Legends just got wind of the trouble as well.

So I’ll see you all in two weeks when Legends Of Tomorrow returns with Supergirl, The Flash and Arrow for the epic 2016 Crossover Event. Stay tuned!