Whereas Arrow and Legends of Tomorrow took relatively subdued pre-Thanksgiving episodes before the upcoming Heroes vs Aliens Crossover, Supergirl set the stakes even higher and dealt with 3 overwhelmingly powerful storylines. And as if all this content wasn’t enough, they did it all by kicking things off ‘in media res’!

Now long time readers will know I LOVE episodes/ films that start ‘in media res’ as they set up a climactic battle right from the start as well as prompt the viewer to pay particular attention to when they flashback and fill in the missing puzzle pieces. So let’s take a Closer Look at each of these stories – Guardian Framed, Cadmus’s Attack, J’Onn’s Dilemma – and see how they interconnect and what they set up in Supergirl “The Darkest Place”. 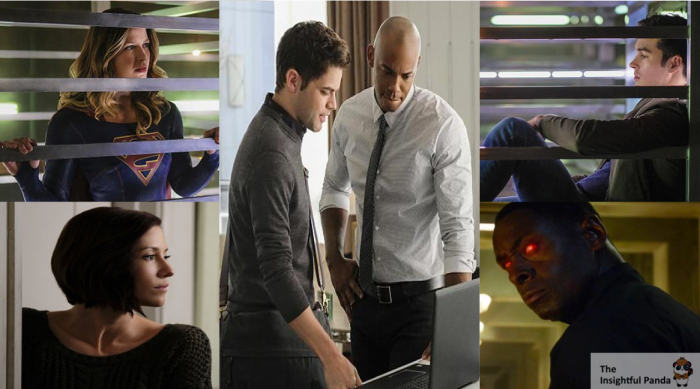 A major theme of this episode that united each storyline – and beyond – was the idea of tainted identities, whether they be via copycats or unforeseen changes. This is seen most clearly with Guardian as all the good work James and Winn are doing is almost thrown out the window as a copycat vigilante takes it upon himself to do what Guardian won’t, kill. A vigilante feeling like a hero/heroine is merely a half measure sure seems to be a recurring theme in Arrow-verse lately as the Green Arrow just had to deal with one last week. Though as a new hero, Guardian has to race against time to track down the real vigilante and clear his name.

Similarly, at episode’s start we see another ‘copycat’ or should we say ‘copied cat’ at the real Hank Henshaw emerges and pretends to be J’Onn in order to aid in recapturing Mon-El. Later Henshaw reveals himself as Cyborg Superman and makes amply clear that he feels J’Onn has tarnished his “pure reputation”. Similarly, Lillian Luthor’s identity is revealed as the head of Cadmus and she goes on to weave a tail of how her “darling” and “genius” boy’s reputation was ruined by that evil alien. Needless to say, both Henshaw and Luthor have perverted views on “good and evil”; but in their minds, their identity (or the identity of a loved one) was perverted by someone who in reality was actually the force of good.

Sadly J’Onn doesn’t have time to worry about his predecessor coming back as he is already having some identity problems of his own. As it turns out, there is an adverse effect to the blood transfusion as we predicted last week, but it’s not as simply as “mixing alien DNA” but actually White Martian experimentation in which they found a way to make their own blood a catalyst to rewrite Green Martian DNA. This is precisely what M’Gann was hoping to avoid and the result is a rage fueled battle between her and J’Onn – a direct reversal of the fight they had in “Survivors”, but more on that later.

With all these mistaken identities and misdirects, one has to wonder if Jeremiah Danvers was really the same – or if he too was (or will be) turned by Cadmus. My long time theory was that he could be Cyborg Superman as a reimagining of the New 52 continuity where Kara’s father is Cyborg Superman. Much like how we saw two Metallo’s a few week’s ago in “The Last Children Of Krypton”, we so too could see two Cyborg Supermen – one the prototype (and originally) and another the 2.0 version. In this way, they could preserve the original comic identity (Corbin as Metallo & Henshaw as Cyborg Superman) as well as introduce a new version (ie: a father figure of Kara as Cyborg Superman 2). And even if Jeremiah was genuinely helping, you can imagine Cadmus isn’t going to be too happy with him – and cybernetically enhancing someone and adding an explosive in them to ensure they follow orders is something Cadmus has done in the past – ie: Suicide Squad.

Now we already discussed Cyborg Superman(s) as a threat for Kara later this season, but there could be much more than that in the foreseeable future. We might not know what Cyborg Superman / Cadmus wants with Project Medusa – or how they even know about it – from the Fortress of Solitude, but we do have a pretty firm grasp of what also can come about from Cadmus’s experiment with Kara’s blood. The last time Kara bled, Maxwell Lord was able to artificially create a Bizarro Kara to battle her. So it’s not farfetched to expect Cadmus to do the same – especially when they’ve done it in other DC continuities.

In the DC Animated Series Justice League Unlimited, Kara’s DNA was used by Cadmus to create an evil clone named Galatea. Could we see Cadmus battle aliens with a home grown and mind controlled Supergirl of their own? We’ll have to wait and see – but introducing a more aggressive Kara (who bears a strong resemblance to Power Girl aka Earth-2 Supergirl) could be a fun way to please both those still shipping James with Kara and Mon-El with Kara. Additionally – from a story perspective – Lillian Luthor seems to have a love of Greek Mythology and Galatea is in Greek Mythology as the statue (creation) come to life.

Next week, Supergirl will have it’s annual Thanksgiving episode as well as deal with a few leftover/ lighter items from this week. Though be assured as the episode comes to a close, the Heroes Vs Aliens Crossover will begin! So if you’re in the US, enjoy your Thanksgiving. If you’re abroad, enjoy your week ahead. And I’ll see everyone next week for Heroes vs Aliens Part 1! So stay tuned!